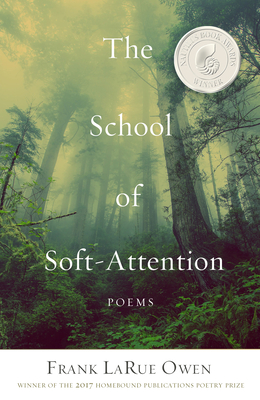 It has been said that poetry can be a marker of where a poet has been, or a way for a poet to point to places where we, the reader, can go. Both types of poems appear in The School of Soft-Attention. Not corralled to any one poetic style, the heart-mind-river that forms this flowing collection has been shaped by the author’s diverse cross-cultural experiences, spiritual tutelage with a New Mexican wisewoman and wilderness guide, and fueled by such practices as meditation in the Zen tradition, mountain pilgrimages, fasting in the deserts of New Mexico, and intensive dreamwork. At every point along the way, the poems in The School of Soft-Attention invite the reader to turn to a new way of seeing, a new way of paying attention to the life within and around us.


Praise For The School of Soft-Attention…

"With echoes of Tufu, Basho, Thoreau, Gary Snyder, Mary Oliver, and others, yet with a voice throughout that is authentically and distinctively his own, Frank LaRue Owen's The School of Soft-Attention gracefully incorporates many influences, both ancient and modern, East and West, Japanese Zen, Chinese Taoist hermit, Native American, to name just a few. I am moved and impressed." — Frank W. Berliner, author of Falling in Love with a Buddha and Bravery: The Living Buddha Within You

Frank LaRue Owen’s poetry is influenced by diverse sources including the teachings embedded within dreams, the seasons, the energies of various landscapes, and the churning gyre of the soul’s journey, resulting in a poetic path his late teacher referred to as "deep-mapping of unseen reality, inner, outer". Owen studied for a decade with a New Mexican wise woman and wilderness guide who — inspired by her own training in Zen and Mesoamerican spiritual traditions — blended contemplative practice, dreamwork, and nature spirituality rooted in the forests, arroyos, and mountains of the American Southwest. The practice of poetry was inseparable from this path…along with lots of green chiles and pan-fried tortillas. He also studied eco-poetry and eco-literature with the late Jack Collom of the Jack Kerouac School of Disembodied Poetics.
Loading...
or
Not Currently Available for Direct Purchase