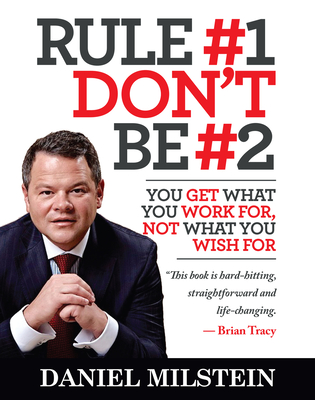 In his fourth book, RULE #1 DON’T BE #2, Daniel Milstein inspires like never before, challenging us to dream BIG with his charismatic candor, giving us each a compelling glimpse into our own limitless potential. In addition to Dan’s riveting accounts of overcoming adversity, Rule #1 Don’t Be #2 captivates with countless stories of those who’ve dominated their respective fields against seemingly insurmountable obstacles. Framed in Dan’s fast-paced, conversational style and his best-loved, thought-provoking quotes, we’re gifted the life-changing lessons of the world’s greatest achievers. Don’t miss Dan’s heartfelt tutorial that is destined to become a giant in the motivational genre, and beyond.

Dan Milstein is the Founder and CEO of the Gold Star Family of Companies, operating in over 40 offices worldwide, specializing in financial services, sports management, publishing, and film production. Under Dan’s visionary leadership, Gold Star has been named among Inc. magazine’s 500 Fastest Growing Companies in America, and Dan has been featured in many notable publications and numerous rosters of Top Business and Finance Professionals in the USA. Dan was born in Kiev, Ukraine and just 16 when he narrowly escaped the demise of the Soviet Union by immigrating to the United States. Arriving with only 17 cents and one suitcase, but fueled by his determination to seize the American Dream, Dan stormed every opportunity in his path, quickly rising to the rank of #1 Loan Officer in the USA and then building one of the most recognized brands worldwide. International best-selling author of The ABC of Sales, 17 Cents and a Dream, and Street Smart Selling, Dan brings his unique brand of motivation to the greatly anticipated Rule #1: Don’t Be #2, chock-full of energizing accounts of others who have dominated their field. From film stars to sport stars, world leaders to company leaders, these enterprising individuals will move you to work until your idols become your rivals. Highly acclaimed CEO, sports agent, consultant, speaker and author, Dan Milstein is credited with motivating hundreds of thousands with his simple, yet powerful, brand of inspiration. Read and be inspired.