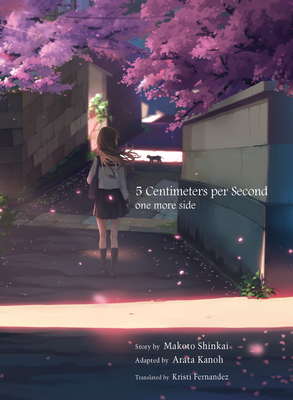 A contemporary classic, 5 Centimeters per Second won animator Makoto Shinkai international renown as a rare talent. Indeed, he just might be one of the most powerful bards of romantic longing and thwarted love working today in any medium. This official novelization narrates from the other side—for instance, from the point-of-view of the girl rather than the boy in the legendary first segment, “Cherry Blossoms”—to tell a story that is both deeply engaging for first-timers and astonishingly fresh for fans of the film.

The author of fantasy novels based on the Shining videogame series, Arata Kanoh is best known for his imaginative prose adaptations of the masterpieces of Japan’s hottest animator. Most recently, his take on Your Name was the #1 Kindle bestseller at Amazon Japan.

Arata Kanoh, wrote novels such as 'Voices of a Distant Star and 'The Place Promised in Our Early Day' which are both Makoto Shinkai films. He known for novel adaptations of Makoto Shinkai's works, giving more depth and new perspectives.