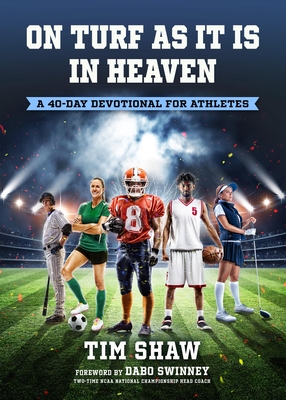 On Turf as It Is in Heaven

A 40-Day Devotional for Athletes

From the former Tennessee Titan linebacker who brought award-winning Blitz Your Life: Stories from an NFL and ALS Warrior comes the empowering and inspiring On Turf as It Is in Heaven: A 40-Day Devotional for Athletes. Broken down into eight weeks of focused thoughts, each five-day week of entries leads readers to both greater athletic and faith growth. Weekly section themes are: Fundamentals Practice Team Accountability Struggles Game Day Identity Good Run These forty devotionals will inspire students and pros alike to find new meaning in their game, relating dreams of playing for packed stadiums to the challenges of playing for an audience of One. Drawing on his time playing high school football in Michigan, as well as college-level play at Penn State, and his seven seasons in the NFL, Tim's observations of his own faith journey on and off the field are conveyed in an easy, conversational tone, but relate universal truths. Over these 40 concise thoughts, each ending with Shaw's signature Whiteboard Challenge, readers will train not only their hearts for competition, but their spirits for God's playbook.

Former linebacker Tim Shaw's seven years in the NFL included seasons with the Carolina Panthers, Jacksonville Jaguars, the Chicago Bears, and the Tennessee Titans. A graduate of Penn State, he also holds an MBA from George Washington University. Now an entrepreneur, Tim is a TEDx speaker and winner of the 2018 ALS Association Hero Award. Tim's first book, Blitz Your Life, won two Benjamin Franklin Awards in 2018 for Cover Design and the Bill Fisher Memorial Award for Best First Book by a new publisher. On Turf as It Is in Heaven is Tim's second book.
Loading...
or
Not Currently Available for Direct Purchase