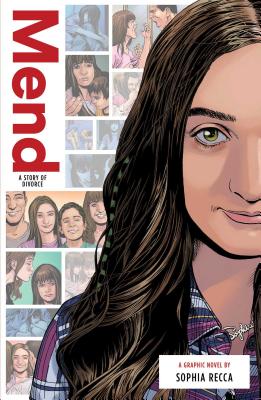 Mend: A Story of Divorce is the first in a series of graphic novels written by young adults for their peers.

Sophia, the fourteen-year-old author and protagonist, tells the heart-wrenching story of her parents’ divorce. She was just nine years old, happy and enjoying life with her mom, dad, and little brother in Las Vegas, Nevada. Unexpectedly, one night, a violent argument disrupted her sleep and shattered her life. The next morning, her parents told her the dreaded news—they were getting divorced. Her dad was moving to California, while Sophia and her brother would stay with their mom.

Any child who has experienced the trauma of divorce will understand Sophia’s reactions: First, she blamed herself. But then, she remembered a note a teacher once wrote on her report card, and was inspired to focus on bringing both parents back into her life. Even if they could not be under the same roof, she thought, they could still share in caring for her and her brother.

Sophia’s story will resonate with children (and adults) who have faced a split in their family, or who have friends dealing with divorce. The book includes helpful advice for parents, as well as a special Teacher’s Corner page.

Zuiker Press is proud to publish stories about important current topics for kids and adolescents, written by their peers, that will help them cope with the challenges they face in today’s troubled world.

Mr. Zuiker is well known as the Creator/Executive of CSI: Crime Scene Investigation, the most popular franchise on CBS television; it is also the most successful TV show is global history.

Illustrator Garry Leach is a British artist best known for his work co-creating the new MARVELMAN with writer Alan Moore. As an artist Garry was a frequent contributor to 2000 AD working on DAN DARE, JUDGE DREDD, THE V.C.s, and FUTURE SHOCKS. At DC Comics, Garry worked on the LEGION of SUPERHEROES, HIT MAN, MONARCHY, and the GLOBAL FREQUENCY. Garry has been cover artist for DC Comics, 2000AD, Virgin Comics and Dynamic Forces.

Sophia Recca is a 14-year-old from Las Vegas, Nevada. She attends private school, where she is a “straight A” student. Sophia likes arts and crafts, watching TV with her father, and spending fun weekends with her mother.
Loading...
or
Not Currently Available for Direct Purchase