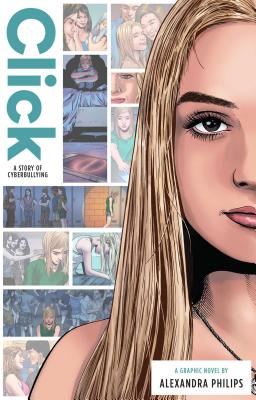 Click is the heroic story of a young girl who was terrorized by schoolmates with merciless online harassment and her brave effort to overcome her tormentors. Her powerful, compelling story is told in brilliant graphic novel form.

Lexi’s story of cyberbullying is a shocking depiction of young teenager’s torment in the newfound world of online harassment. Lexi, from Northridge, California, is ganged up on by a few girls over a misunderstanding on the schoolyard.  The incident escalates on social media, local chat boards, and gossip sites.  Forced to change schools, Lexi gets her karmic revenge when she returns to her old school for a Winter Formal.  In a gesture of pure bravery, Lexi turns the tables on the “clique” by landing the boy at the dance and her picture in the yearbook.

Illustrator Garry Leach is a British artist best known for his work co-creating the new MARVELMAN with writer Alan Moore. As an artist Garry was a frequent contributor to 2000 AD working on DAN DARE, JUDGE DREDD, THE V.C.s, and FUTURE SHOCKS. At DC Comics, Garry worked on the LEGION of SUPERHEROES, HIT MAN, MONARCHY, and the GLOBAL FREQUENCY. Garry has been cover artist for DC Comics, 2000AD, Virgin Comics and Dynamic Forces.

Lexi Philips is a 16 year old girl from West Hills, California. She attends a private school where she plays competitive volleyball. On the weekends, Lexi enjoys hanging out with friends and traveling with family.
Loading...
or support indie stores by buying on