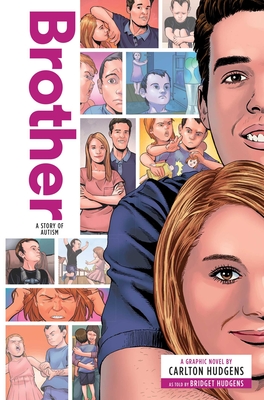 Bridget and Carlton are as close as any sister and brother. But their relationship is particularly special. Carlton has autism and is almost completely nonverbal. He’s smart, funny, creative, and loving. He has immense challenges in speaking full sentences.  Bridget’s fierce loyalty to and compassion for her brother led to an unbreakable bond that has helped the siblings cope with divorce and homelessness. Carlton’s devotion to his family is loud and clear, even in his silence.

Carlton Hudgens was diagnosed with autism spectrum disorder at three years old. He didn’t speak or interact with the world around him, except with humming and flapping arms. The diagnosis provided a label, but not an answer. He was considered low-functioning, but all that meant was that there was a laundry list of tasks he couldn’t do, and little recognition of what he could.

Carlton’s sister, Bridget, just a year younger, became his protector, sharing their birthdays so that he could open the presents first, taking the blame for a broken toy to spare him from being punished on Christmas Day. She understood that she was living in Carlton’s world, not the other way around.

Because Carlton doesn’t speak in full sentences, Bridget has opted to tell his story. “My brother is brilliant in every way,” Bridget says. “He just doesn’t speak like we speak.”

When Carlton was five years old, he uttered his first words: “I love you, Mom!” Bridget was elated. That sentence meant that he could hear her, that he could speak, and that she had a chance to reach her ultimate goal of bonding with her brother.

Bridget was his protector, but Carlton became Bridget’s savior.

When Bridget was eleven years old, she and Carlton went to the public pool. Carlton was a natural swimmer, but Bridget couldn’t swim at all. As the two played a game in the shallow end, they drifted closer to the deep end. Bridget panicked, swallowing water and crying for help. Carlton swam to her and pulled her to safety. No longer was he different, with special needs, or “that kid with autism.” To Bridget, he was the big brother who had just saved her.

Later on, he became a savior to others. Autism didn’t stop him feeling compassion and love. It just made it harder for him to express those emotions.

Their parents’ divorce and the subsequent remarriage of their mother created a more stable life for Carlton, but Bridget had a hard time accepting the good changes. She had put herself second for so long, it was difficult to allow an adult to take over the care of her brother.

By early adulthood, Bridget began to realize that the most fulfilling part of her life was forming a deeper connection with Carlton—an unbreakable bond that would shape brother and sister for the rest of their lives. It was Carlton’s influence that led to her passion for helping others with special needs.

Bridget Hudgens is 26 years old. She is attending the University of Nevada, Las Vegas where she is perusing a Bachelor’s of Science in Special Education.
Loading...
or support indie stores by buying on