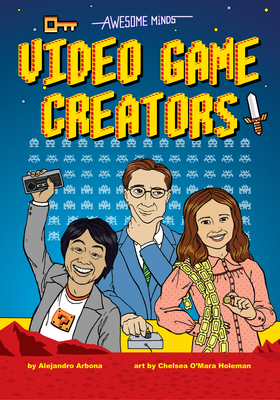 Did you know that Nintendo started in the mid-19th century as a playing card company and that the Japanese giant also sold rice and operated taxi cabs? And did you know that the very first video game was called Tennis for Two and was created by a US government scientist named William Higinbotham?

Today, video games play a gigantic role in our culture and none of this would have been possible without people like Shigeru Miyamoto, the creative mastermind that turned a failed business venture into the game that eventually inspired him to build Donkey Kong and Mario Bros., or Donna Bailey, who created the arcade video game sensation Centipede. With full-color illustrations and lively text, and chock-full of interesting facts, Awesome Minds: Video Game Creators tells the stories of these amazing men and women who turned a small hobby into a multimillion-dollar industry that changed the way we play and interact, from our living rooms to the arcades, on our computers to our handheld devices. Awesome Minds: Video Game Creators is the perfect read for those with creative spirits, curious minds, and a love of technology and video games.

Alejandro Arbona began his publishing career nearly fifteen years ago as an editor and writer at Wizard: The Magazine of Comics, Entertainment, and Pop Culture, and his comic book writing has appeared in the Eisner Award-winning anthology Love is Love (DC Comics/IDW Publishing) and the independent sci-fi anthology Fearless Future. Alejandro was an editor at Marvel Comics and Valiant Entertainment; he currently edits Black Magick and The Old Guard for Image Comics, and Ghost in the Shell: Global Neural Network for Penguin Random House and Kodansha. Alejandro is the author of Awesome Minds: Video Game Creators. He lives in New York City.


Chelsea O'Mara Holeman is a freelance illustrator located in the Shoals area of Alabama. She has done editorial illustrations for magazines like No’Ala, SET, and What’s Up? Annapolis, as well as numerous children’s and adult books and interactive e-books from companies like Krullstone Publishing, Linxter, and Story Bayou. Chelsea works in a variety of different settings and mediums, expanding her work to include window murals, gaming apps, graphic novels, T-shirt and poster designs, podcast artwork, illustrated maps, and abstract paintings. In her down time she loves watching horror movies with her cats and drawing small illustrations that she hides around town for people to find.
Loading...
or
Not Currently Available for Direct Purchase