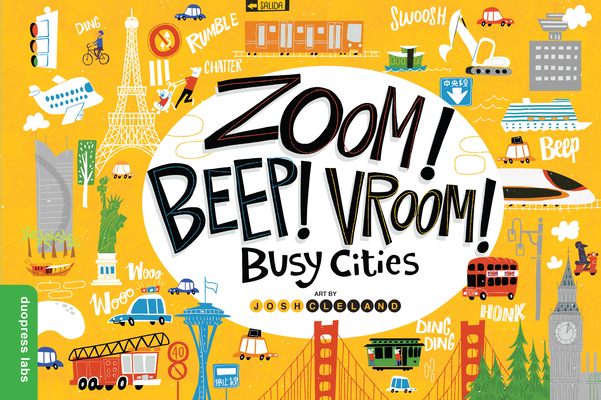 Cars and trucks whoosh in Chicago, a bullet train zooms in Hong Kong, and a bicycle strolls around Paris (ding-ding!).

Cities around the world are always on the move, and this lively book puts little ones in the driver's seat with a cacophony of sounds right on the streets of some of the most exciting metropolises on the planet, including San Francisco, Seattle, New York, Tokyo, London, Vancouver, and more. The sturdy pages feature fire trucks, diggers, motorcycles, and boats, as well as police cars (weeeoooeee!), airplanes (swish!), and strollers in the park (whir, whir!). Zoom! Beep! Vroom! Busy Cities will surely charm any young vehicle enthusiast and the many tots that are intrigued by life in the big city.

Vehicles, geography, and onomatopoeia come together in this sturdy board book for toddlers. Cartoonish illustrations are active, colorful, and vibrant, and they buzz with vehicular activity. Each double-page spread focuses on a different city, presenting a well-known city landmark and the city skyline. The name of the city is also clearly indicated: on a big red double-decker bus in rainy London, on a young man's T-shirt at a train station in Mexico City, on a child's hat in Vancouver. And what the toddlers are really going to be interested in is the assortment of vehicles in all those cities. Spare narrative text is enhanced by onomatopoeia, which adds interest and action: the "zoooooooooooooooom" of a bullet train in Hong Kong, the "woo woo woo" of a police car and the "wee uuu wee uuu" of an ambulance in Tokyo, and the quiet "whir whir whir" of a stroller in Vancouver. Diverse adults and children, with skin and hair of many different shades, are present in all the cities, and women are shown driving a fire engine in New York, a bulldozer in Seattle, a bicycle in Paris, and, with a headscarf, flying the Dubai Air plane. With plenty to see, hear, and identify, young children will enjoy the many busy cities and the plethora of vehicles in them. (Board book. 1-3) —Kirkus Reviews.

Josh Cleland is an illustrator working out of his home studio just outside of Portland, Oregon, where he resides with his wife, Rayna. You will find his work in various children’s magazines, including Highlights and Storytime, and in other media such as greeting cards, websites, billboards, and more. His recent illustrated children's books include TAD and Portland Baby.
Loading...
or support indie stores by buying on