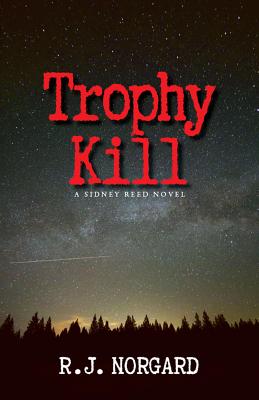 Private investigator Sidney Reed hasn�t been the same since the tragic death of his wife, Molly. Sharing a rundown apartment above an Anchorage, Alaska coffee shop with a cat named Priscilla, he dulls his bitter memories with cheap beer and sarcasm. When he�s offered a bundle of cash for a simple surveillance job, Sidney sees a chance to finally put the broken pieces of his life back together. But once the job turns deadly, he'll have to sort through a mountain of clues to solve this case - and confront his own demons in the process.
In the hard-boiled tradition of Raymond Chandler, Trophy Kill is the first in a bold new series of Alaskan mysteries by R.J. Norgard, a former private investigator andU.S. Army counterintelligence officer, featuring Anchorage private investigator Sidney Reed. Using Alaska's beautiful and unforgiving landscape as his palette, Norgard paints a tough yet sympathetic protagonist with a razor-sharp wit, along with a rich cast of supporting characters, to create a striking portrait of crime and passion in the 49th state. This and succeeding installments in the Sidney Reed Mystery Series feature the Sidney slowly coming to terms with loss as he struggles to regain his footing in a world he knows intimately yet struggles to understand. Along the way, he keeps asking why Molly had to die and holding himself responsible for her death.

R.J. Norgard grew up so close to the Lake Erie shore, his feet are still wet. He's worked as a newspaper reporter, photographer, and private investigator. He also served twenty years as a counterintelligence officer and agent in the U.S. Army, with tours in exotic places like Alaska, Germany, and Las Vegas, which he thought was too hot. When he's not writing, he's likely messing around in boats, reading, playing tennis, or working on some local volunteer project. TROPHY KILL is his first novel. He can be found online at http: //www.rjnorgard.com
or support indie stores by buying on
Copyright © 2020 American Booksellers Association