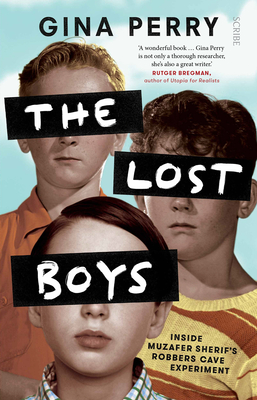 An investigative history of one of social psychology's classic--and most controversial--studies: the Robbers Cave experiment

In 1954, a group of American boys attended a remote summer camp where they were split into two groups, and encouraged to bully, harass, and demonize each other. The results would make history as one of social psychology's classic studies, and one of the most controversial: the Robbers Cave experiment.

Conducted at the height of the Cold War, the experiment officially had a happy ending: the boys reconciled, and psychologist Muzafer Sherif demonstrated that while hatred and violence are powerful forces, so too are cooperation and harmony. Today it is proffered as proof that under the right conditions warring groups can make peace. Yet the true story of the experiments is far more complex, and more chilling.

In The Lost Boys, Gina Perry explores the experiment and its consequences, tracing the story of Sherif, a troubled outsider who struggled to craft an experiment that would vanquish his personal demons. Drawing on both on archival material and new interviews with the subjects, now in their 70s and none aware that the summer camps they'd attended had in fact been experimental ruses, Perry pieces together a story of drama, mutiny, and intrigue that has never been told before.