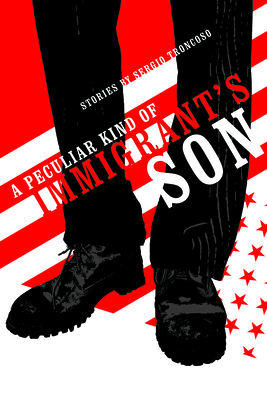 A Peculiar Kind of Immigrant's Son

A collection of short stories where Mexican-Americans grapple with their roots as their ambitions take them far from home.

How does a Mexican-American, the son of immigrants, a child of the border, la frontera, leave home and move to the heart of gringo America? How does he adapt to the worlds of wealth, elite universities, the rush and power of New York City? How does he make peace with a stern old-fashioned father who has only known hard field labor his whole life? With echoes of Dreiser's American Tragedy and Fitzgerald's Gatsby, Troncoso tells his luminous stories through the lens of an exile adrift in the 21st century, his characters suffering from the loss of culture and language, the loss of roots and home as they adapt to the glittering promises of new worlds which ultimately seem so empty.

Sergio Troncoso was born and raised in El Paso, Texas. His previous works include A Peculiar Kind of Immigrant's Son, From this Wicked Patch of Dust, and The Last Tortilla. He often writes about the United States-Mexico border, immigrants, families and fatherhood, and crossing cultural, religious, and psychological borders. Among the numerous awards he has won are the International Latino Book Award for Best Collection of Short Stories, the Kay Cattarulla Award for Best Short Story, Premio Aztlan Literary Prize, Southwest Book Award, Bronze Award for Essays from ForeWord Reviews, and the Silver and Bronze Awards for Multicultural Fiction from ForeWord Reviews. Troncoso has taught fiction and nonfiction at the Yale Writers' Workshop in New Haven, Connecticut for many years. He has served as a judge for the PEN/Faulkner Award for Fiction and the New Letters Literary Awards in the Essay category. His work has recently appeared in New Letters, Yale Review, Michigan Quarterly Review, Texas Monthly, and New Guard Literary Review. The son of Mexican immigrants, Troncoso grew up on the east side of El Paso in rural Ysleta. He graduated magna cum laude from Harvard College and received two graduate degrees in international relations and philosophy from Yale University. A Fulbright scholar, Troncoso was inducted into the Hispanic Scholarship Fund's Alumni Hall of Fame and the Texas Institute of Letters (TIL). He currently serves as TIL President.
Loading...
or
Not Currently Available for Direct Purchase