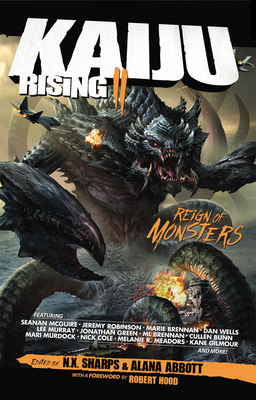 We are surrounded. A wealthy man hunts the kaiju that killed his daughter on an island inhabited by mega-fauna. They are everywhere. By the light of a campfire a young girl shares the true story of the epic brawl that caused Hurricane Irene. There is no escape. Sabotage turns an international science competition into a monster and mecha massacre. They Reign. From deep ocean trenches and dense vibrant jungles to alien worlds and other dimensions, the kaiju have returned! This is a collection of sixteen stories by some of the hottest names in speculative fiction. These modern myths celebrate and explore the Japanese film genre popularized by films such as Godzilla, Gamera: The Giant Monster, King Kong, Cloverfield, and Pacific Rim.

N.X. Sharps is a writer whose short fiction has appeared in Manifesto UF, That Hoodoo Voodoo That You Do, SNAFU: Black Ops and SNAFU: Hunters. He is the coauthor of From the Ice They Came. He lives in Oakland, Maryland. Alana Abbott is an editor who has worked on a variety of projects including biographies, news articles, reference books, role playing games, and fiction. She lives in New Haven, Connecticut. Robert Hood is a writer and editor. He is the author of more than 120 short stories, 15 children’s books, five young adult novels, and an adult epic fantasy novel titled Fragments of a Broken Land. He lives in Australia.
Loading...
or support indie stores by buying on
(This book is on backorder)