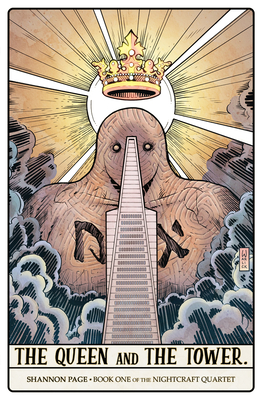 The Queen and The Tower (Nightcraft Quartet)

Calendula Isadora (Callie to her friends) is a powerful witch with a mind for science...magical science. Her independent ways, not to mention her unseemly affection for her human boyfriend, put her at odds with her San Francisco coven. The last straw comes when she builds and animates a massive golem. Really, such things are simply not done among respectable witchkind. Then a sexy Old Country warlock arrives on the scene, just to complicate things further, as Callie's best friend, Logandina, falls ill with an inexplicable malady. As Callie delves deeper into the swirl of mysteries surrounding her, the witchkind powers-that-be try to keep her in her place. Naturally, she defies them, with help from her mentor, eight-hundred-year-old Gregorio Andromedus, her mother, a "wild magic" witch with a talent for the tarot, and a few new friends. But when illusion, deception, danger and intrigue are the common currency, how can any witch know who to trust or where to turn? Can Callie rely on anyone besides herself-and her familiar, Elnor?

Shannon Page was born on Halloween night and spent her early years on a back-to-the-land commune in northern California. A childhood without television gave her a great love of the written word. At seven, she wrote her first book, an illustrated adventure starring her cat Cleo. Sadly, that story is out of print, but her work has appeared in Clarkesworld, Interzone, Fantasy, Black Static, Tor.com, the Proceedings of the 2002 International Oral History Association Congress, and many anthologies, including the Australian Shadows Award-winning Grants Pass, and The Mammoth Book of Dieselpunk. She also regularly publishes articles and personal essays on Medium.com, including the widely read “I Was a Trophy Wife.”

Books include The Queen and The Tower, first book in “The Nightcraft Quartet”; Eel River; the collection Eastlick and Other Stories; Orcas Intrigue, Orcas Intruder, and Orcas Investigation, the first three books in the cozy mystery series “The Chameleon Chronicles,” in collaboration with Karen G. Berry under the pen name Laura Gayle; and Our Lady of the Islands, co-written with the late Jay Lake. Our Lady received starred reviews from Publishers Weekly and Library Journal, was named one of Publishers Weekly’s Best Books of 2014, and was a finalist for the Endeavour Award. Forthcoming books include A Sword in the Sun (Nightcraft book 2); a sequel to Our Lady; and more Orcas mysteries. Edited books include the anthology Witches, Stitches & Bitches and the essay collection The Usual Path to Publication.

Shannon is a longtime yoga practitioner, has no tattoos (but she did recently get a television), and lives on lovely, remote Orcas Island, Washington, with her husband, author and illustrator Mark Ferrari. Visit her at www.shannonpage.net.