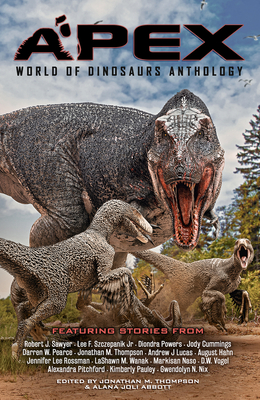 Once, they ruled the Earth

Dinosaurs. Apex predators. Prehistoric creatures, whose very steps shook the crust of the Earth. Monsters of nightmares—or mighty creatures of honor? In these pages, you will meet:

* A hunter who makes the ultimate sacrifice for his clutch
* A wise king who cannot be defeated—even by the best of his warriors
* A queen, facing the apocalypse of her people
* A scientist who fears the outcome of her experiments
* Two drunken scientists and a time traveling chicken
* Dinosaur riders in the future—and the past

Are you prepared to meet them, tooth and claw?

Alana Joli Abbott has been an editor for eighteen years, working on a variety of projects including biographies, news articles, reference books, role playing games, and fiction. At Outland, she has served as co-editor to anthologies, including Kaiju Rising II: Reign of Monsters.

Alana is the author of the novels Into the Reach, Departure,and Regaining Home, the interactive multiple choice novel apps Choice of Kung Fu, Showdown at Willow Creek, and Choice of the Pirate, and she has written for the comics including Cowboys and Aliens II and Ithaca. Her game writing has been featured in Steamp