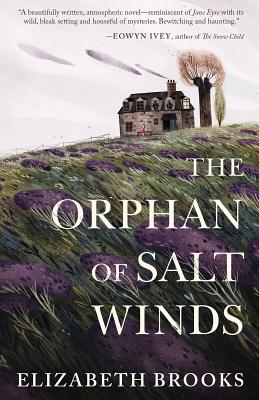 The Orphan of Salt Winds

“As 2015 winds down, so does the life of Virginia, who at the age of 86 has decided to let a sign from her mysterious past give her reason to walk out into the treacherous marsh of the Salt Winds that claimed her foster father when she was a child. As Virginia ponders her fate, a young woman appears on her doorstep and complicates her plan, bringing a tidal wave of memories that cause her to see her last day in an altogether darker light. Told in alternating timelines that follow Virginia as a child in the early stages of WWII and as she plots out her last day alive in 2015, Elizabeth Brooks’ novel of memories past and present plays out as a locked-room mystery Agatha Christie would be envious of.”
— Javier Ramirez, The Book Table, Oak Park, IL
View the List

“Reading The Orphan of Salt Winds, I was immediately pulled in. Elizabeth Brooks’ beautifully written novel weaves historical fiction and literary mystery into a deeply felt family drama with complex characters; the limits of empathy, family, and personal responsibility are highlighted against the backdrop of World War II-era England. Virginia is an unforgettable narrator, and the shifting between her childhood voice and her perspective in old age makes the unfolding of this novel incredibly engaging.”
— Kelsey O'Rourke, Literati Bookstore, Ann Arbor, MI
View the List

For fans of Eowyn Ivey, Rose Tremaine, and Kate Atkinson, The Orphan of Salt Winds is a bewitching debut about the secrets that haunt us.

England, 1939. Ten-year-old Virginia Wrathmell arrives at Salt Winds, a secluded house on the edge of a marsh, to meet her adoptive parents—practical, dependable Clem and glamorous, mercurial Lorna. The marsh, with its deceptive tides, is a beautiful but threatening place. Virginia’s new parents’ marriage is full of secrets and tensions she doesn’t quite understand, and their wealthy neighbor, Max Deering, drops by too often, taking an unwholesome interest in the family’s affairs. Only Clem offers a true sense of home. War feels far away among the birds and shifting sands—until the day a German fighter plane crashes into the marsh, and Clem ventures out to rescue the airman. What happens next sets into motion a crime so devastating it will haunt Virginia for the rest of her life. Seventy-five years later, she finds herself drawn back to the marsh, and to a teenage girl who appears there, nearly frozen and burdened by her own secrets. In her, Virginia might have a chance at retribution and a way to right a grave mistake she made as a child.

Elizabeth Brooks’s gripping debut mirrors its marshy landscape—full of twists and turns and moored in a tangle of family secrets. A gothic, psychological mystery and atmospheric coming-of-age story, The Orphan of Salt Winds is the portrait of a woman haunted by the place she calls home.


Praise For The Orphan of Salt Winds…

The Orphan of Salt Winds is a beautifully written, atmospheric novel—reminiscent of Jane Eyre with its wild, bleak setting and houseful of mysteries. . . . Bewitching and haunting.

The Orphan of Salt Winds is an atmospheric, beautifully paced novel about sacrifice, the urge to belong, and revenge. It’s full of well-drawn characters I loved to hate, and those that I didn’t want to let go, even after I closed the last page.

Filled with unexpected twists, beautifully rendered characters, and told with great style, The Orphan of Salt Winds will seep into your soul.

Like Daphne du Maurier, this novel powerfully conjures up a
place,
a time and a story that are unforgettable.
— Rosamund Lupton, author of SISTER

The Orphan of Salt Winds is the perfect winter read — evocative, gothic, and utterly transportive.

Elizabeth Brooks’s writing has a quietly magical quality that conjures the atmosphere of Salt Winds effortlessly. This novel is a tenuous and thrilling unfolding of how events in Virginia’s past shape her actions in the present. An excellent blend of psychological mystery with a coming-of-age story, packaged in a unique historical setting—The Orphan of Salt Winds genuinely gave me goosebumps.

I love this story! It captivated me from the
first page and I was mesmerized
until the last! Elizabeth Brooks has developed such wonderful characters and I
developed strong feelings about all of them. . . . And then add to that some mystery with an unexpected twist at the
end! What more could you ask for? A must read!
— Stephanie Crowe, Page & Palette

The Orphan of Salt Winds simultaneously functions as a gothic, historical, psychological mystery and bildungsroman.

Elizabeth Brooks is the author of The Orphan of Salt Winds and The Whispering House. She grew up in Chester, England, graduated from Cambridge University, and resides on the Isle of Man with her husband and two children.

1. What was your first impression of Lorna and Clem? Did this change over time?

2. How would you describe the atmosphere of the house at Salt Winds—emotionally, socially, and culturally? How did this setting shape your reading experience?

3. What is Lorna and Clem’s relationship to Max Deering? How does their complicated past influence Virginia’s interactions with him?

4. Is Lorna right to give shelter to a German airman, in the context of the second World War?

5. Why do you think Jozef writes Call of the Curlew for Virginia’s twelfth birthday?

6. What, if anything, does Virginia gain from her encounter with Sophie Deering?

7. What is the significance of the Curlew skull Virginia finds on New Year’s Eve?

8. Why does Max Deering slink away, defeated, after his encounter with Lorna and Jozef? He’s won, hasn’t he?

9. Salt Winds is cold, lonely and full of the darkest memories. Why do you think, once she is old enough to leave, Virginia chooses to stay?

10. The Orphan of Salt Winds grapples with the theme of guilt. Which character do you blame most for what happens on the marsh?