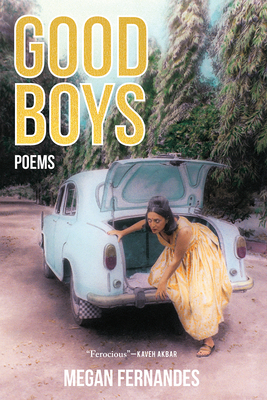 Good Boys speaks to our shared knowledge that things cannot go on as they are and yet, day by day, we are going on. Fernandes explores what it feels like to live a life organized by risk, the ordinary wagers and debts we make in our attachments to the people, places, and ideas that we love, our promises to ourselves and others: 'The way we bet. What we gamble with.' Being good is one way of managing risk. But it also allows us to ignore the ways in which our world is built on theft—the piracies of whiteness, a sense of entitlement to someone else’s body or someone else’s country. . . . The poems demonstrate an intelligent handling of form, disrupting convenient distinctions between the neatness of intellect and the chaos of feeling.

Fernandes’s debut collection, The Kingdom and After (Tightrope Books, 2015), introduced us to her voice as both blunt truth-teller and measured verse-architect. In Good Boys, her new collection published last month from Tin House Books, she plunges back into family, relationships, and identity—then explores the lens itself through which she sees and thinks about her world. Her anger and agitation speak so clearly, so compellingly, that we find ourselves reading her poems on the edge of unease: What will happen next? Is this going to hurt? Will she soothe us? And she does, with great care and love.

This tremendous collection of poems centers feminism, racism, and rage in all its imperfections, contradictions and candor.
— Ms. Magazine