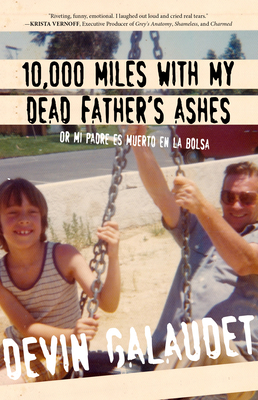 Finalist for the Foreword INDIES Award for Best Autobiography & Memoir Part travelogue, part memoir, a book about how we say good-bye to our loved ones It was Devin Galaudet's job to take the ashes and pour them into the waters of Cadiz, Spain after his father's death. Carrying them across Spain by car, train, and backpack, this was their swan song, their "buddy picture" come to life. Half a mile from the Mediterranean, though, Devin lost his father's ashes. Standing in the middle of a windy cobblestone street in Old Town Cadiz, he wondered what the hell just happened--not just in that moment, but the forty years prior. This is a wild-eyed history of secret family stories that includes fifty stolen cars, sacred African fertility dolls, a Darth Vader mask-wearing junkie, a mysterious secret family, a Playboy magazine found in a sewer hidden next to toilet paper wrapped downers, a Vegas hooker with one impressive breast, a hero's journey, and traveling across the world with a black jug that contained his father in a rolling suitcase. A wickedly funny memoir that is part adventure and part tender reminiscence, 10,000 Miles with My Dead Father's Ashes will make you laugh, cry, and yearn for your own Spanish adventure.

Devin Galaudet is the editor and publisher of the well-established In The Know Traveler series of web sites, which celebrated thirteen years in August. He also publishes several other travel-inspired web sites including In The Know Hotels and The Forever Bride, which chronicles he and his wife's goal of getting married in 100 countries around the world. He has written for the Huffington Post, Technorati, The Citron Review, TravelAge West, and Turkish Airlines' Sky Life Magazine. Devin holds an MFA in Creative Nonfiction from Antioch University at Los Angeles where he was the commencement speaker representing his class. He has been interviewed at the California Writers Coalition, JohnnyJet.com, Thinking Aloud, the Jewish Journal, among others and performed at Antioch's Literary Uprising. He lives in Los Angeles, California.
Loading...
or support indie stores by buying on