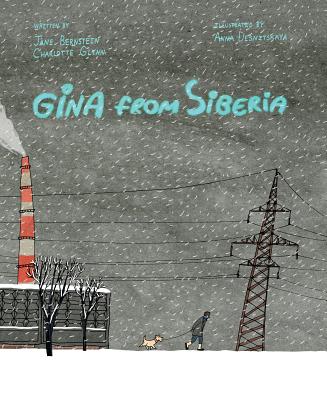 Based on a true story of Gina, a wire haired terrier, whose family snuck her out of Siberia and into the USA at the conclusion of the Cold War, this beautiful and thrilling tale follows Gina as her family travels by bus, train, car, plane and minivan. Upon arrival at her new home, 5,681 miles away from her old home, Gina is not happy and lets everyone around her know it. But slowly, she comes to accept her new surroundings with the help of her new friend Victor, a large boxer. Talking about her friends and family back home in Siberia heals the emotional wounds, making Gina believe that just maybe her new home isn't so bad after all.

Jane Bernstein is the author of five books, most recently Rachel in the Word. Her film work includes the screenplay for the Warner Brothers movie, Seven Minutes in Heaven. Her essays and articles have appeared widely in such places at the New York Times, Ms., Creative Nonfiction, the Massachusetts Review, and Glamour. Charlotte Glynn is a filmmaker. Her first feature documentary, Rachel is, a film about her sister who is developmentally disabled, had its broadcast premiere on PBS America reFramed. Her most recent film, The Immaculate Reception, premiered at the 2014 Sundance Film Festival. It was a Vimeo Staff Pick, won the Hammer to Nail Short Film Contest and the Special Jury Award at the New Orleans Film Festival, among others. Filmmaker Magazine named Charlotte one of the 25 New Faces in Independent Film, in 2014. Anya Desnitskaya is an illustrator living in Russia.
or
Buy Here
Copyright © 2020 American Booksellers Association