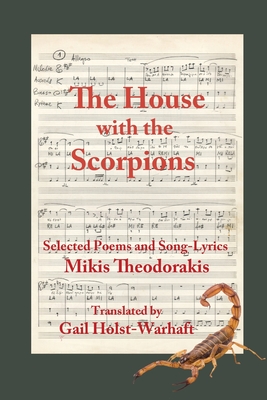 The House with the Scorpions

In Greece Mikis Theodorakis is a national icon. He is the country's most famous composer, and a figure who has spent his life struggling against injustice and oppression in his own country and elsewhere. He has been jailed and tortured for his beliefs, continuing to produce a stream of music and poetry despite his suffering. It is time that his own poetry was recognized as an important element in his creative life. In an age where Bob Dylan can win a Nobel Prize, and Leonard Cohen's lyrics are treasured as poems, it is also time to recognize the importance of the song-lyric as a literary form. Gail Holst-Warhaft, who has spent many years working with the composer as a musician, biographer and translator, has translated all of the composer's lyrics and combined them with Theodorakis's virtually unknown poems. Together, they reveal a man whose passion for poetry was the wellspring of his creativity. The book presents Theodorakis's poems and lyrics in Greek and English. This makes it clear that the translations do not obey the rhyme-scheme of the originals but try to maintain rhythmic patterns that are satisfying to the English ear. This book is not only a collection of Theodorakis's poetry, but the record of an extraordinary life.