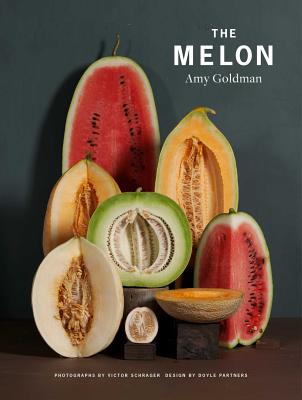 Melons are the vegetable garden’s crown jewels—and Amy Goldman’s lifelong passion and calling. Her new book, THE MELON, will entice and educate, whether you are a passionate gardener, a locavore, or simply delight in the inherent beauty and evanescence of the fruits of the vine.


THE MELON was produced by Amy Goldman in collaboration with celebrated photographer Victor Schrager over the course of nine years. It’s a cut above their award-winning melon book MELONS FOR THE PASSIONATE GROWER, published in 2002. In the intervening years, Goldman has grown as a gardener and has learned a lot more. She has taken advantage of recent research findings that informed her thinking on crop history and best cultural practices.

THE MELON includes additional horticultural groups of melon and gives watermelon—which is less genetically diverse—more of a fair shake. Much like the word “cantaloupe,” which is used colloquially and erroneously by Americans to describe muskmelon, the word “melon” is commonly used in the United States to refer to both melon and watermelon. These vining crops belong to two different species within the Cucurbitaceae or gourd family of plants.

Melon and watermelon are now among the world’s most important vegetable crops. The 125 varieties illustrated and described in THE MELON comprise 85 melons and 40 watermelons from all over the globe. Their stories are as diverse as the melons themselves.

In addition to the stunning portraits and beauty shots and detailed descriptions of melons, THE MELON includes in-depth sections on picking and choosing melons and watermelons in the market, growing them in the garden, and saving pure heirloom seeds. Mouth-watering recipes by renowned cookbook author Mindy Fox complete the journey from seed to table.

Praise For The Melon…

WITH SHORT, COOL summers and wet clay soil, my Vermont garden offers only one of the essentials melon cultivation requires: lots of room. Quel tragique, a French gardener might say, for even a hasty glance at the fruits -- 85 melons and 40 watermelons -- included in Amy Goldman's The Melon will have readers seeking a warm, sunny garden plot with well-drained, sandy loam.

While The Melon is large and lavishly illustrated enough to be considered a "coffee-table book," that label would be a disservice because it is also informative, well-written, concise, and clear -- in fact, a first-rate reference book. Tucked between photographer Victor Schrager' s gorgeous, seductive portraits of each melon are carefully researched variety descriptions and histories, advice on growing, primers on saving seeds and hand pollination, and a complete list of seed sources. There's even a thorough explanation of how to tell when melons are ripe, which, reminds us that what you pick is what you get: Melons do not get sweeter off the vine.

Goldman trialed 125 melons over nine years on her Hudson Valley, New York, farm. All are stable open-pollinated (OP) varieties whose seeds breed true (produce plants identical to their parent). Most are also heirlooms and date back a century or more. Selected for particular traits-usually by gardeners in a specific region-their seeds have been faithfully handed down from one generation to the next.

Eagle-eyed readers may notice that some inclusions have far shorter histories. These varieties, such as the green-fleshed 'Fordhook Gem', are known as "created heirlooms," stable OP varieties developed after 1945. (The year 1945 marks the year hybrids began to be widely used by farmers and home gardeners.)

In addition to throwing light on a favorite fruit, The Melon is also a plea for preserving heirloom and OP crops. Goldman is a long­time mainstay of Seed Savers Exchange (www.seedsavers.org), the preeminent seed preservation organization in North America. And who wouldn't want to save flavorful fruits with names like 'Collective Farm Woman' and 'Hero of Lockinge'? Or 'Georgia Rattlesnake,' the variety Mark Twain may have had in mind when he wrote in Pudd'nhead Wilson that when one tastes a southern watermelon "he knows what the angels eat. It was not a Southern watermelon that Eve took; we know it because she repented."

The Melon features gorgeous color photos by Victor Schrager and profiles all kinds of melons; but offers far more depth than just a photo survey alone. It's a resource nine years in the making which gathers the latest research, facts, and ideas about melon growth and natural history, and will appeal to science readers, gardeners, and botany collections alike.

Chapters cover each melon's natural history, qualities, and botanical details, with some 200 images packing the book. Tips on choosing and using the melons (as well as growing them in a garden) round out the history and science, while a small selection of melon recipes addresses versatile uses for melon largess.

The result is an attractive book that will hold interest beyond specialty audiences, one which will reach into many general-interest collections.
— Diane Donovan

Amy Goldman is a gardener, author, artist, and well-known advocate for seed saving, plant breeding, and heirloom fruits and vegetables. Her mission is to celebrate and catalogue the magnificent diversity of standard, open-pollinated varieties, and to promote their conservation. Goldman is described as “perhaps the world’s premier vegetable gardener” by Gregory Long, President Emeritus of the New York Botanical Garden. She has authored four books, including three that have earned the American Horticultural Society Book of the Year award: Melons for the Passionate Grower (2002), The Compleat Squash: A Passionate Grower’s Guide to Pumpkins, Squashes, and Gourds (2004), and The Heirloom Tomato: From Garden to Table (2008). Most recently she wrote Heirloom Harvest: Modern Daguerreotypes of Historic Garden Treasures (2015), which was illustrated by Jerry Spagnoli. Melons are Goldman’s lifelong love and calling. This new book, The Melon, illustrated by Victor Schrager and many years in the making, is a comprehensive and definitive work that includes portraits in words and photographs of 125 extraordinary varieties, expert advice on cultivation and seed saving, and a generous selection of delicious melon recipes.

For more than 30 years Victor Schrager has been a master of still-life photography. Born in Maryland, Schrager grew up in New York City. He earned a BA at Harvard in 1972 and an MFA at Florida State University in 1975. Schrager's photographs explore how different modes of information, especially visual, literary, historical, and scientific, function to produce and communicate knowledge. The works for which he is best known are still lifes composed of layered images and texts—among them reproductions of paintings, maps, magazine pictures, pages from books, and photographic prints—in an investigation of how context structures the meaning of all representations. His work has been exhibited at galleries and museums around the world and is included in the collections of the Museum of Modern Art, Philadelphia Museum of Art, Maison Européenne de la Photographie, the Whitney Museum of American Art, and the Museum of Fine Arts, Houston, among many others. He has received fellowships from the Guggenheim Foundation, the MacDowell Colony, and the National Endowment for the Arts. Schrager has been the principal photographer for three of Amy Goldman’s previous three books on vegetables and fruits. He lives in upstate New York.
Loading...
or
Not Currently Available for Direct Purchase