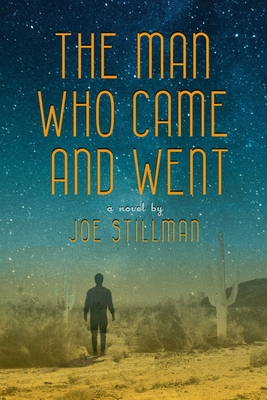 The Man Who Came and Went

The Man Who Came and Went, a novel of the new west, is a magically realistic story for the modern era that will tease your understanding and beliefs, and draw you into the mysteries of the universe, from the brilliant mind of Joe Stillman, acclaimed Academy Award nominated co-writer of “Shrek.”

Fifteen-year-old Belutha Mariah, our storyteller, is the oldest of three kids from three different fathers. Her life’s goal is to keep her dysfunctional mom, Maybell, from procreating yet again and then to leave the coffin-sized town of Hadley, Arizona the second she graduates high school.

Along comes the new grill cook at Maybell’s Diner, Bill Bill, a mysterious drifter with the ability to mind-read orders. As word spreads in Hadley and beyond, the curious and desperate pour into this small desert town to eat at Maybell's.

Some believe Bill knows the secrets of the universe.

Belutha figures he’s probably nuts. But his cooking starts to transform the lives of locals and visitors, and Belutha finds her angry heart opening, as Bill begins to show her the porous boundary between this life and what comes after.

In a normal American town, something new and strange, and yet achingly familiar, begins to unfold.

Praise For The Man Who Came and Went : A Novel…

"I just finished your book, it’s phenomenal. I cried at the end, it’s a really really wonderful book. I’ve told all my friends about it and they’re all excited to read it when it comes out."
— Molly Likovich

Joe Stillman co-wrote Shrek for Dreamworks which earned him an Academy Award® nomination for Best Adapted Screenplay and the Annie and BAFTA Awards.  Other produced features are Beavis & Butthead Do America, Shrek 2, Gulliver’s Travels, Planet 51 and Joseph King Of Dreams.

In television, he was co-producer and writer on King of the Hill, for which he received two Emmy Award® nominations. He was a writer and story editor for Nickelodeon’s The Adventures of Pete and Pete and a writer on MTV’s Beavis and Butthead. More recently he worked on Nickelodeon’s Sanjay and Craig and Kirby Buckets for Disney. Other TV credits include Albert for Nickelodeon, The War Next Door for the USA Network, Clueless, Doug and Danger and Eggs for Amazon.

He’s currently working on a Curious George feature for streaming on Peacock.