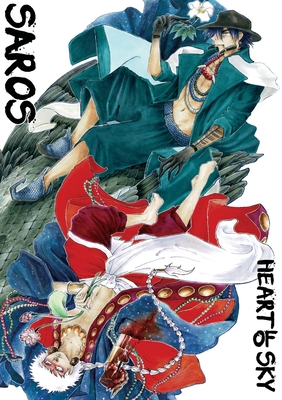 Saros: Heart of sky is the first in a series of graphic novels that explores ancient mythology,
human sacrifice and the struggle for existence from the perspective of the ancient gods and spirits.

The old spirit gods, the Netari, lived among ancient humans who offered flesh and blood in sacrifice to give them physical human form.
But brutal corruption, greed and over consumption by the Netari eventually drove the humans away.
Facing oblivion, the Netari turned to their ancient magic: but the ritual needed a human key, a special spirit whose bloody demise could give them back their power.
Ocote, a newly appointed Netari official, was sent from the Netari city of Torana to hunt down the human key for sacrifice.
Jerico, an exiled Netari king, emerges to prevent them from capturing the special young human. Can Jerico get to the young human before Ocote does?

Saros is a tale of gods, spirits and humans, expertly woven in beautiful hand dawn action, a graphic novel series that reaches deep into the imagination to inspire the reader.
A struggle between the ancient and the new, the degenerate and the evolution of the human soul reaching deep and wide into the Underworld, the spirit realm and the human world.