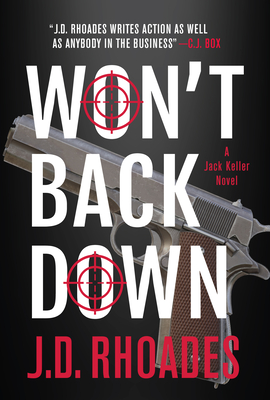 J.D. Rhoades writes action as well as anybody in the business, and bail bondsman Jack Keller is a winner. ―C.J. Box, #1 New York Times bestselling author of the Joe Pickett series Jack Keller's violent past is very much with him these days, despite his efforts to leave it behind. He's back in rural North Carolina, looking for steady work, and trying to establish a relationship with Francis, the son he never knew. But the boy's heard too much about Keller, particularly from Ben Jones, his half-brother and the son of Marie, the woman Keller loves. Ben's alienated, angry, and headed for trouble, and Keller's living with the guilt of knowing that much of Ben's turmoil stems from that fateful day of blood and madness on a burning mountainside when Keller saved Ben's life and that of his mother. But it came at a terrible price. Keller's intervention on behalf of a bullied refugee girl and her family draws him into a confrontation with people from that family's own dark past, including a trio of vicious and sadistic female assassins--with Ben, Marie and Francis destined to end up in the crosshairs as well. Jack Keller's never been one to back down, and once again, he'll be forced to pick up the gun to defend the people he loves. This time, however, he won't be alone, and Jack will find out that the debts of his past may never be paid in full.

Born and raised in North Carolina, J.D. Rhoades has worked as a radio news reporter, club DJ, television cameraman, ad salesman, waiter, attorney, and newspaper columnist. His weekly column in North Carolina's The Pilot was twice named best column of the year in its division. He is the author of six novels in his acclaimed Jack Keller series: The Devil's Right Hand, Good Day in Hell, Safe and Sound, Devils and Dust, Hellhound on My Trail, and Won't Back Down, as well as Ice Chest, Breaking Cover, and Broken Shield. He lives, writes, and practices law in Carthage, NC.
Loading...
or support indie stores by buying on