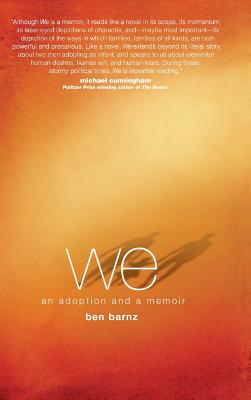 an adoption and a memoir

we: an adoption and a memoir centers on the story of Barnz adopting a child and the legal battle with the birthfather that began the day after the child's birth - and two days before 9/11. The book interweaves this narrative with Barnz's path to parenthood - beginning with his closeted youth in 1980's New York, a time when it was statistically more likely he would die from AIDS than become a father.

Alternating between legal suspense story and memoir, we examines shifting gender roles in parenting as well as modern notions of family-construction, but ultimately we is a personal narrative with universal appeal. It delves into the complicated relationships that arise between birthparents and adoptive parents, between birthmothers and birthfathers, between parent and child, between married couples. In this story, as in life, empathy is revealed where, technically, none should exist; this book examines our desire to do better, be better- better people, better friends, better parents, better strangers, better ourselves. And in the end, it celebrates the potential we all have for forgiveness.

Independent film producer Ben Barnz and his husband, filmmaker Daniel Barnz, make up "We're Not Brothers Productions" and have written, directed and produced the films Cake and Phoebe in Wonderland. They are currently developing an HBO pilot with Lena Dunham and a feature film with Brad Pitt's Plan B about Ryan Wash, an openly gay black debate champion.