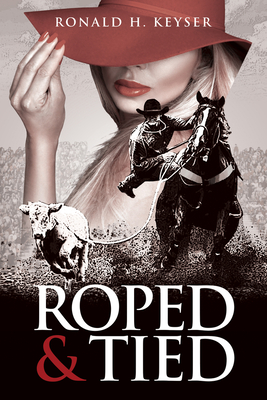 Roped & Tied is the fictional story, based on true events of Dani Harrison, a young woman from a well-to-do family who gives up a life of privilege to marry and travel the professional rodeo circuit with Jake O'Brien, a dashing young tie-down roper who, over the years, firmly establishes himself as the best of all time. The story's backdrop paints a vivid picture of the highs and lows of professional rodeo life, but the plot also exposes the weaknesses of the main characters, from excessive drug and alcohol use to turning their backs on family and friends, adultery and family violence. The story is about good times and bad, and the lengths Dani and Jake are willing to go to to establish their legacy in one of the most competitive sports in the country. That same drive, however, could also be the reason they lose their grip on the one thing they want the most

Ron Keyser was born in Marshall, Texas on September 24, 1957. By the time he was eleven years old, his family had moved to several different cities, including Tyler, College Station, Dallas, Overland Park, Kansas, Richardson, Austin, San Antonio and finally Houston. His father was a debit agent in the insurance business and did an amazing job of supporting a family by himself, but his quest to make more money dragged their family around the state of Texas for a number of years.

His parents finally settled near Houston in 1969, where he eventually graduated Alief Hastings High School in Alief, Texas in 1976. He also attended college at the University of Houston.

He didn’t start writing until he was in his late forties, but throughout his life he always enjoyed reading and believed one day he could write a book. It would never have happened, however, if it wasn’t for his wife, Lori. When he told her he had the idea for the story bouncing around in his head, without hesitation, Lori told Ron he should write it down. From that day forward, they dove into the project full speed. As Texas history buffs, they took many trips to Huntsville, Texas to visit the prison museum, tour the town and try to get their hands on anything that would help them get a feel for what Huntsville and the townspeople were like in 1880. They took a trip to Belton and stayed in the Morning Glory Inn, now a bed and breakfast that was built in 1875 and was the inspiration for Turner Bell’s home in Ruby’s Prayer. They also took time to visit the Bell County Museum and the Temple Railroad Museum in Temple. Ruby’s Prayer is Ron’s first book, but he has several projects in the works and looks forward to seeing them in print.