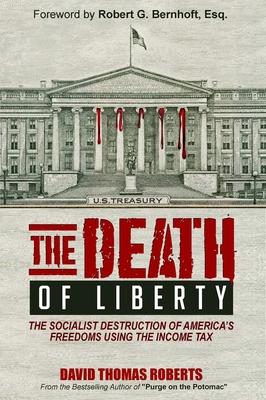 The Death of Liberty

The Socialist Destruction of America's Freedoms Using the Income Tax

In 1776, the colonists declared Independence from England in large part due to the many onerous Acts thrust upon them by Parliament including the Stamp Act in 1765 the Tea Act in 1773. The combination of these burdensome Acts on the colonies coupled with “Intolerable Acts” that severely limited the colonists Liberties, America rebelled. America won her liberty finally in 1783, only to see American’s freedoms put in a permanent state of peril with the successful progressive class warfare argument that resulted in the 16th Amendment in 1913.

Politicians and government bureaucrats discovered, is they can manipulate the 71,000+ page tax code to reward their cronies and punish their enemies.

The legacy of the IRS is one of scandals, malfeasance, criminality, incompetence and terror – yet Americans, for the most part tolerate it. Why? The history of IRS abuses of common citizens is legendary, and the stories you will read in this book are chilling.

Why has the IRS become “weaponized”, spending $11 million on guns and ammo in the last 10 years?  Surely Patrick Henry, Thomas Jefferson and Samuel Adams would have never let such an abusive form of government exist in the United States. Why do we?

David Thomas Roberts, a naturalized Texan, released his first political thriller Patriots of Treason in 2012. Demand for a sequel to the action-packed plot was carried forward in A State of Treason which won numerous awards including several Best Fiction Book of the Year 2016 from notable book clubs. Roberts' third book in his Patriots Series, Purge on the Potomac is set for release in early 2018.

In between the the political thrillers Roberts, who is the CEO of a technology firm he founded in 1997, penned a business book Unemployable: How to be Successfully Unemployed Your Entire Life in 2017. This book won the Texas Authors' Association Business Book of the Year 2017 Award.

Roberts is a serial entrepreneur and is active in politics. His personal twitter account boasts 55,000+ followers. Roberts has been married 34 years and has three grandchildren and lives outside of Houston in Montgomery, Texas.