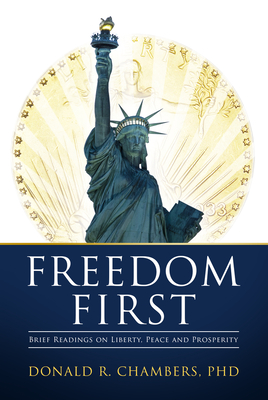 Freedom First is a collection of 118 nonfiction readings focused on simplified stories that convey practical economic insights.  Most of the readings explain how free markets drive economic prosperity and how market prices communicate signals to coordinate cooperation. The book clarifies the concept of natural rights and the role of natural rights and other institutions in promoting freedom and prosperity. Some of the readings discuss the causes of economic growth and evaluate the role of wealth in meeting the goals of the participants of economies.

The book examines the core beliefs and goals of the progressive left and defends traditional American values regarding economics. The book’s many varied discussions focus on applying evidence and logic to ascertain the relative merits of economic freedom and authoritarianism.

A moderate number of the readings have a “college professor memoir” aspect that includes recollection of classroom discussions or activities. The readings are independent of each other and therefore can be read in any order and at any pace.

Donald R Chambers is a recently-retired (June 2017) professor of finance with 36 years of teaching experience. Dr. Chambers has written several books regarding investments and personal finance that are distinguished by their clear writing and ability to make difficult concepts accessible to his audience. He is the lead author of the 600+ page Modern Corporate Finance:Theory and Practice which is in its eighth edition (forthcoming with FlatWorld), the 1,000 page Alternative Investments which is in its third edition with Wiley, and several other books onfinance. Dr. Chambers has published over 50 scholarly articles.

In more recent years, he has written numerous blogs and spoken frequently regarding investments in his role as Chief Investment Officer of Biltmore Capital Advisors.