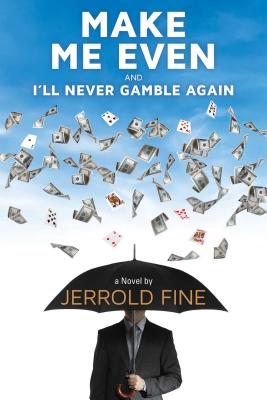 Make Me Even and I'll Never Gamble Again

Drawing from his own experiences in the turbulent ‘70s and ‘80s, hedge fund pioneer Jerrold Fine blends a heartfelt story of a young man fiercely intent on achieving independence with a fascinating insider’s look at the perks and pitfalls of a high-stakes life in the world of financial markets.

Rogers Stout has the gambler’s gifts—a titanic brain, an uncanny ability to read people, and a risk-taker’s daring. As an apathetic high school student who loves baseball but lacks a 90-mph fastball, he knows that the game does not begin until the ball leaves the pitcher’s hand. But his life needs direction.

Everything changes the summer he is invited into the boisterous environment of an investment bank’s trading room, and to a gambling hall dive where he immediately wins big at poker, capturing the attention of his co-workers with his card-playing skills. Intrigued by trading markets, Rogers’ intellectual curiosity takes him to Wharton and then Wall Street, where he faces challenges as an outsider who thinks and acts differently from the white-shoe establishment. With his intuition and prowess, he’s ready to rewrite the rules and tackle markets with a flair that leaves his employers flabbergasted. Rogers leans heavily on his gut instincts and the unusual cadre of friendships he cultivates, but learns the hard way to be alert to the perils that await him. As Rogers plays his career hand, life plays another. Should he follow the temptress Elsbeth and her ravishing beauty, or Charlotte, his high-spirited first love?

An intriguing look at human aspiration and the interplay of honor, greed, fear, and individuality, the novel Make Me Even and I’ll Never Gamble Again reveals a time when a new generation upended the status quo on Wall Street and forever changed investing.

Along with two Wharton colleagues Jerrold Fine, at age 24, started one of the first hedge funds in 1967. Nine years later he founded a private investment firm which he managed until he converted it into a family office in 2014. That was the year Rogers Stout entered his consciousness and refused to leave.

Praise For Make Me Even and I'll Never Gamble Again: A Novel…

“An illuminating and fascinating insider’s look at the days when a new generation shook the Wall Street status quo, narrated by a daring young risk-taker determined to prove his worth and earn his independence. The narrative is propelled forward by the competitive intensity and passion of his quest to make it big on Wall Street. There is a compelling honesty to this ‘must win’ attitude. I couldn’t put this novel down.” — Paul N. Roth, Founding Partner of Schulte, Roth & Zabel

“A rip-roaring yarn of baseball, poker and Wall Street told with humor and humanity, and a loving rendering of Wharton in the seventies.” — Geoffrey Garrett, Dean, The Wharton School

“I bet you won’t be able to put down Make Me Even and I’ll Never Gamble Again. Jerry Fine’s debut novel tells the rollicking tale of Rogers Stout, a middle-class kid from Cincinnati with a knack for numbers and a rapier wit. You’ll root for the charming Rogers as he heads east, working his way through the elite Wharton School and then rising through the ranks on Wall Street. By turns hilarious, insightful and touching, Fine has written a coming-of-age story for the ages.” —Peter Lattman, Vice Chairman, The Atlantic

“The years approaching and immediately beyond our twenties are filled with sexual excitement, wonder at the range of choices, terror of failing and a variety of disappointments. The hero of Jerry Fine’s smartly written book survives these challenges because of his competitiveness, humility and resilience. Anyone reading this will relive his or her own experiences and be reminded of what a miraculous time of discovery it was.” —Byron R. Wien, Vice Chairman, Private Wealth Solutions at Blackstone Group

Jerrold Fine is a graduate of the Wharton School of the University of Pennsylvania and has served multiple terms on its Undergraduate Executive Board and Board of Overseers. He has been a founding managing partner of a hedge fund since he was 24 years old. He continues to run his family’s investments while he works diligently on his next novel. Jerry has conveniently forgotten his baseball batting averages but still relishes memories of winning poker hands. He lives in Connecticut with his artist wife and a ridiculously spoiled Portuguese Water Dog.
Loading...
or
Not Currently Available for Direct Purchase