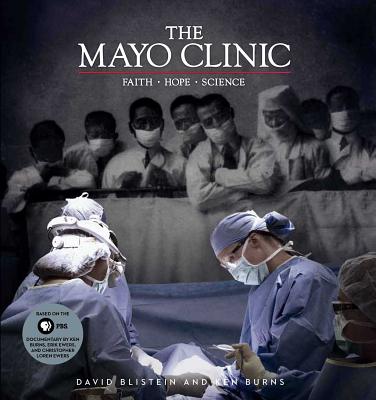 Based on the PBS documentary by Ken Burns, Erik Ewers, and Christopher Loren Ewers airing September 25.

On September 30, 1889, W.W. Mayo and his sons Will and Charlie performed the very first operation at a brand-new Catholic hospital in Rochester, Minnesota. It was called Saint Marys.

The hospital arose out of the devastation of a tornado that had struck the town six years earlier. After the storm, Mother Alfred Moes of the Sisters of Saint Francis told the Mayos that she had a vision of building a hospital that would “become world renowned for its medical arts.”

Based on the film by acclaimed documentary filmmaker Ken Burns, The Mayo Clinic: Faith, Hope, Science chronicles the history of this unique organization, from its roots as an unlikely partnership between a country doctor and a Franciscan order of nuns to its position today as a worldwide model for patient care, research, and education.

Featuring more than 400 compelling archival and modern images, as well as the complete script from the film, the book demonstrates how the institution’s remarkable 150-year history continues to inspire the way medicine is practiced there today. In addition, a series of case studies reveals patients, doctors, and nurses in their most private moments as together they face difficult diagnoses and embark on uncertain treatments.

The film and this companion book tell the story of an organization that has managed to stay true to its primary value—the needs of the patient come first. Together, they make an important contribution to the critical discussions about the delivery of health care today in America…and the world.

DAVID BLISTEIN spent twenty-five years as the owner and creative director of a regional ad agency, after which he began writing nonfiction books and documentaries. He was a writer on the PBS documentary Cancer: The Emperor of All Maladies and is currently working on a documentary about The Gene and co-authoring a book on the history of opium. David cowrote Grover Cleveland Again! with Ken Burns—a book about the American presidents for young adults—and is the author of David’s Inferno.

KEN BURNS has been making documentary films for almost forty years. Since the Academy Award– nominated Brooklyn Bridge in 1981, Ken has gone on to direct and produce some of the most acclaimed historical documentaries ever made, including The Civil War; Baseball; Jazz; The Statue of Liberty; Huey Long; Lewis & Clark: The Journey of the Corps of Discovery; Frank Lloyd Wright; Mark Twain; Unforgivable Blackness: The Rise and Fall of Jack Johnson; The War; The National Parks: America’s Best Idea; The Roosevelts: An Intimate History; Jackie Robinson; Defying the Nazis: The Sharps’ War; and The Vietnam War. Future projects include films on the history of country music, Ernest Hemingway, Muhammad Ali, Benjamin Franklin, the American Revolution, the history of crime and punishment in America, Lyndon B. Johnson and Civil Rights, Leonardo da Vinci, the history of Reconstruction, and Winston Churchill, among others. Ken’s films have been honored with dozens of major awards, including fifteen Emmy Awards, two Grammy Awards, and two Oscar nominations. In 2008, at the News & Documentary Emmy Awards, Ken was honored by the Academy of Television Arts & Sciences with a Lifetime Achievement Award.
or support indie stores by buying on
Copyright © 2020 American Booksellers Association