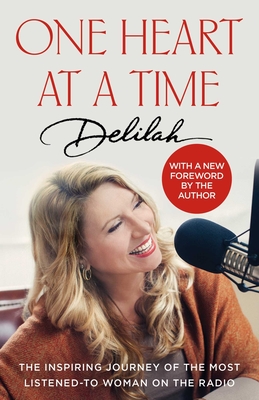 One Heart At A Time

Delilah, the most listened-to woman on American radio, has distinguished herself as the “Queen of Sappy Love Songs” and America’s ultimate romance guru. But Delilah’s life off-air is all the more extraordinary—a life full of trials, forgiveness, faith, and adventure. In One Heart at a Time, Delilah’s heartfelt account of her own story reveals what shaped the voice that 9 million listeners know and love.

Today, Delilah is the founder of an NGO called Point Hope, the owner of a 55-acre working farm, and an inductee of the National Radio Hall of Fame. But to achieve this, she often had to pave her own way. Disowned by her father, divorced, and fired from a dozen jobs over the years, Delilah pushed forward through family addiction and devastating loss, through glass ceilings and red tape. Her consistent goal to help those in need took her everywhere from the streets of Philadelphia to refugee camps in Ghana.

Along the way, Delilah was blessed by thirteen children—ten of them adopted. Though many of them contend with special needs and the forever effects of a broken foster care system, her children have been able to transform their own remarkable lessons into guiding lights for other kids in need. Just as Delilah has done.

One Heart at a Time exposes the real woman behind the microphone. In her easy-going style and characteristic, beloved voice, Delilah tells her deeply moving life story as the series of miracles it is.

Delilah is one of America’s most popular radio personalities, and the most listened-to woman on the radio in America. Her self-titled radio program boasts an estimated 9 million listeners nationwide. She has been inducted into the National Radio Hall of Fame and the NAB Broadcasting Hall of Fame. Her show’s success earned her a National Association of Broadcasters’ Marconi Award in 2016 as Network/Syndication Personality of the Year and a GRACIE Award in 2012. Delilah is also the founder of Point Hope, an NGO that champions forgotten children, particularly those in the Ghanaian community, Buduburam, as well as those in the American foster care system. The mother of thirteen children—ten of them adopted, Delilah splits her time between her nighttime radio program, trips to Ghana, her 55-acre working farm, and her large family. She is the author of three previous books: Love Someone Today, Love Matters, and Arms Full of Love.
Loading...
or
Not Currently Available for Direct Purchase