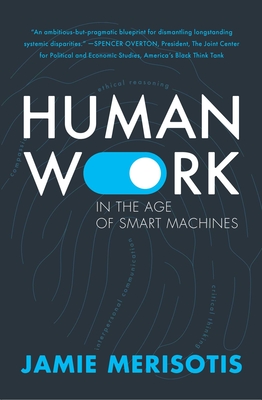 Human Work In the Age of Smart Machines

We are living through a time of upheaval and social unrest, with increasing threats to global health, democratic institutions, and the world’s economies. But behind the alarming headlines is another issue that must be quickly addressed: the role of workers is being transformed—and often rendered obsolete—by automation and artificial intelligence.

As Jamie Merisotis, the president and CEO of Lumina Foundation, argues in Human Work In the Age of Smart Machines, we can—and must—rise to this challenge by preparing to work alongside smart machines doing that which only humans can: thinking critically, reasoning ethically, interacting interpersonally, and serving others with empathy.

In Human Work, Merisotis, author of the award-winning 2015 book America Needs Talent, offers a roadmap for the large-scale, radical changes we must make in order to find abundant and meaningful work in the 21st century. His vision centers on developing our unique capabilities as humans through a lifetime of learning opportunities that are easy to navigate, deliver fair results, and offer a broad range of credentials—from college degrees to occupational certifications. By shifting long-held ideas about how the workforce should function and expanding our concept of work, he argues that we can harness the population’s potential, encourage a deeper sense of community, and erase a centuries-long system of inequality.

As the headlines blink red, now is the time to redesign education, training, and the workplace as a whole. Yes, many jobs will be lost to technology, but if we promote people’s deeper potential, engaging human work will always be available.

Praise For Human Work In the Age of Smart Machines…

“HUMAN WORK reminds us that no matter how technologically advanced our culture becomes, we will always need human morality and will require human beings to make ethical decisions. Jamie Merisotis’s persuasive new book is a call not to abandon our ethical intelligence in favor of an artificial one.” —James Martin, Jesuit Priest, Editor at Large, America magazine, and author of the New York Times bestseller JESUS: A PILGRIMAGE?

“Jamie Merisotis takes concepts too often used to justify exclusion—credentials, skills, and technology—and repurposes them to provide an ambitious but pragmatic blueprint for dismantling long-standing systemic disparities. HUMAN WORK is required reading for anyone committed to the future success of our increasingly diverse nation.” —Spencer Overton, Professor of Law, The George Washington University, and President, The Joint Center for Political and Economic Studies, America’s Black Think Tank

“Artificial intelligence and the age of robots and ‘smart machines’ are often seen as threats—which could make modern economies even less fair, and further drain decency and connectedness from social life. This book is a practical guide to a more desirable human and technological future.” —James Fallows, National Correspondent for the Atlantic and co-author of the bestseller OUR TOWNS: A 100,000-MILE JOURNEY INTO THE HEART OF AMERICA

“As a leader who understands that talent is at the very heart of our national economic success, Jamie Merisotis insightfully explains how we must transform ourselves into a society of lifelong learners and build a new human work infrastructure. This book is a must-read and provides a smart roadmap to create more inclusive opportunities for more Americans.” —Penny Pritzker, Former U.S. Secretary of Commerce, Entrepreneur, and Civic Leader

“HUMAN WORK is a prescient book that has looked around the corner and anticipated the deep shifts ahead in the American working world. A must-read for leaders in business, education, and government.” —James Stavridis, Retired Admiral, U.S. Navy, 16th Supreme Allied Commander at NATO, and 12th Dean of The Fletcher School of Law and Diplomacy at Tufts University

“HUMAN WORK reminds us that work is about meaning, and that in preparing for the future of work we must create pathways toward a more just and equitable world.” —Cecilia Muñoz, Vice President, New America, former Domestic Policy Advisor to President Obama, and winner of a MacArthur Fellowship for her work on immigration and civil rights

“Jamie Merisotis offers a compelling vision for the future of education by calling for learning systems that prepare people for human work—the work that only people can do with artificial intelligence and automation on the rise.” —Dan Porterfield, President and CEO, The Aspen Institute

“A must-read for those committed to building a better future.” —Francisco Marmolejo, Education Advisor, Qatar Foundation for Education, Health, and Community Development, and Former Tertiary Education Lead with the World Bank

“Jamie Merisotis lays out a powerful argument that the rise of new technologies does not need to accelerate inequality. This book is a timely blueprint for us all.” —Amy Liu, Vice President, Brookings Institution, and Co-Founder and Director of Brookings’s Metropolitan Policy Program

“This book is a refreshing alternative to sensationalistic claims that AI, robots, and automation will soon replace a majority of human workers. Merisotis presents an inclusive vision of the growing need for work that only humans can provide, with constructive steps that educators, leaders, and workers themselves can take to increase their employability and life satisfaction.” —Ken Goldberg, Roboticist and William S. Floyd Jr. Distinguished Chair in Engineering, University of California, Berkeley

Jamie Merisotis is a globally recognized leader in philanthropy, education, and public policy. Since 2008, he has served as president and CEO of Lumina Foundation, an independent, private foundation that is committed to making opportunities for learning beyond high school available to all. He previously served as co-founder and president of the nonpartisan, Washington, D.C.–based Institute for Higher Education Policy and as executive director of a bipartisan national commission on college affordability appointed by the U.S. president and congressional leaders. Merisotis is the author of America Needs Talent, which was named a Top 10 Business Book of 2016 by Booklist, a publication of the American Library Association.

His work includes experience as an adviser and consultant in southern Africa, the former Soviet Union, Europe, and other parts of the world. A respected analyst and innovator, Merisotis is a member of the Council on Foreign Relations in New York. Merisotis serves as chairman of the Council on Foundations in Washington, D.C., and past chairman of The Children’s Museum of Indianapolis, the world’s largest museum for children. He also serves on the boards of the Central Indiana Corporate Partnership and the United Kingdom–based European Access Network. He lives with his wife Colleen O’Brien and their children, Benjamin and Elizabeth, in Indianapolis.
Loading...
or
Not Currently Available for Direct Purchase