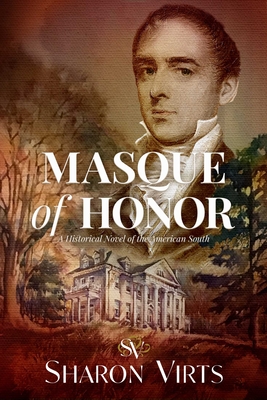 A Historical Novel of the American South

For fans of Cold Mountain by Charles Frazier and The March by E.L. Doctorow comes a brilliant novel of the Old South.

Based on a true story set in antebellum Virginia, Masque of Honor is a riveting tale of romance, political intrigue and loyalty about two sons of the aristocracy and the women they loved.

Just after the end of the War of 1812, General Armistead Mason and his brother-in-law John “Jack” Mason McCarty become embroiled in a bitter dispute that puts in motion an irrevocable chain of events—leading them to the fight of their lives and an outcome that changes everything.

From a cold February morning in 1819 on the snow-covered dueling grounds in Bladensburg, Maryland, to the parlors of Virginia, the District of Columbia, and New York City, Masque of Honor will transport you to the past as only brilliantly detailed historical fiction can. From the men who shaped the law of the land to the women who loved them, this compelling novel is an accomplished, stunning debut.


Praise For Masque of Honor: A Historical Novel of the American South…

“Powerful and compelling. Her characters step off the page and into your life.” —Anthony McCarten, award-winning novelist and screenwriter known for writing biopics, including “The Theory of Everything” (2014), “Darkest Hour” (2017) and “Bohemian Rhapsody” (2018)

“Sharon Virts is a natural storyteller and evocative writer with a keen eye for historical detail and drama. Set in 1816 and based on the true story of the rivalry between two Virginia gentlemen, Masque of Honor unfolds as an epic tale of romance, politics, ambition and power—and paying the ultimate price to defend one’s honor.” —Susan Koch, EMMY and Peabody award-winning filmmaker

“Sharon Virts’ debut novel carries us back to life as it was two hundred years ago in the new State of Virginia. Masque of Honor provides a spicy stew of ambition, envy, honor, courage—and love—as two brothers-in-law drive step by step toward an explosive choice. This is fascinating fiction based on facts, and Virts’ writing will captivate readers. Pick it up and you won't want to put it down!” —Pamela Binnings Ewen, author of The Queen of Paris, The Moon in the Mango Tree, An Accidental Life, and Faith on Trial

Sharon Virts is a successful entrepreneur and visionary who, after more than 25 years in business, followed her passion for storytelling into the world of historical fiction. She has received numerous awards for her work in historic preservation and has been recognized nationally for her business achievements and philanthropic contributions. She was recently included in Washington Life Magazine's Philanthropic 50 of 2020 for her work with education, health, and cultural preservation. Sharon’s passion truly lies in the creative. She is an accomplished visual artist and uses her gift for artistic expression along with her extraordinary storytelling to build complex characters and craft vivid images and sets that capture the heart and imagination. Sharon and her husband Scott live at Selma, a prominent historic residence that they saved from destruction and restored to its original stature. It is out of the love and preservation of Selma that the story of the life, times, and controversies of its original owner, Armistead Mason, has given root to her first novel Masque of Honor.
Loading...
or
Not Currently Available for Direct Purchase