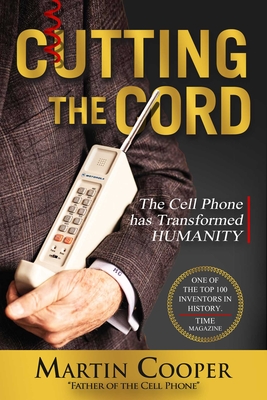 The Cell Phone Has Transformed Humanity

"Cutting the Cord recognizes that innovation has always been about both standing on others’ shoulders and collaboration. Throughout tech, we all stand on Marty’s shoulders just as he stood on Marconi’s.” —Satya Nadella, CEO Microsoft


The cell phone changed the world. It revolutionized how people communicate, freeing them to get in touch with one another at any time and in any place without the constraints of wires. The cell phone led to the creation and growth of new industries. Yet the true story of its creation has not been told…

Cutting the Cord tells that story. It centers on a battle for control of how people communicate, involving government regulators, lobbyists, police, technology breakthroughs, failures, quartz, and a horse. At the center of that story is Martin Cooper. This book describes how his early life influenced the creation of the cell phone.

Industry skirmishes became a political war in Washington, a struggle to prevent a monopolistic company from dominating telecommunications. The drama culminates in the first-ever public call made on a handheld, portable telephone—a cell phone. Despite that, the cell phone we know today almost didn’t happen.

Without the vision of a small group at Motorola, the last forty years of history would be different. Their story is inspiring and instructive. After a twenty-nine-year career at Motorola, Cooper became an entrepreneur, helping launch companies dedicated to accelerating cell phone adoption.

The story of the cell phone has much to teach about innovation, strategy, and management. This book also relates Cooper’s vision of the future of personal communications. That story is far from finished. We have only achieved a small fraction of the cell phone’s potential impact.

The cell phone empowers people from all walks of life. It is reshaping how children learn. The ways we work together will soon seem primitive because of continued advances in the cell phone. Most of all, the cell phone will transform medicine and healthcare, contributing to the eradication of disease, elimination of poverty, extension of life, and close coupling of human and artificial intelligence.

Praise For Cutting the Cord: The Cell Phone Has Transformed Humanity…

"Cutting the Cord recognizes that innovation has always been about both standing on others’ shoulders and collaboration. Throughout tech, we all stand on Marty’s shoulders just as he stood on Marconi’s.” —Satya Nadella, CEO Microsoft

“If you are looking for a story of daring innovation and its challenges, this is a book for you.” —Vint Cerf, VP and Chief Internet Evangelist, Google

“Marty Cooper is the father of the cell phone and our lives have been changed and saved because of this unshackling from our cords. How Marty got us there is an important and compelling story.” —Gary Shapiro, Chairman Consumer Technology Association & CES

“A fun, fascinating and intimately personal look into the gripping story of one of the most consequential inventions in human history: the cell phone. This book reveals how Marty Cooper turned his audacious dream into a reality for all of us. Cutting the Cord is a must-read for anyone who has used a cell phone, is interested in how to lead with humility and humor, or if you just want a fun and interesting book to relish!” —Rob McDowell, Former FCC Commissioner

“For three decades, Marty Cooper was at the center of innovation in portable, wireless technology at Motorola, where I had the distinct pleasure of working with him. Then he spent another 30 years commercializing wireless technology through a number of entrepreneurial ventures. Marty knows how wireless innovations have developed—and where they’re going.” —George M. C. Fisher, former CEO of Motorola and Eastman Kodak

“Lessons on how to be innovative, managing innovation, failing at innovation and inspiring others to be innovative; this book has it all because Marty Cooper has done it all! A treasure trove of insights for anyone who dreams about the future and how to create it.”  —Marshall Goldsmith, #1 Leadership Thinker and #1 New York Times bestselling author of Triggers, Mojo, and What Got You Here Won’t Get You There

Martin Cooper is an engineer, inventor, entrepreneur, and futurist. He is known as the “father of the cell phone.” He led the creation of the world’s first cell phone at Motorola—and made the first public call on it. Over nearly three decades at Motorola, Cooper contributed to the development of pagers, two-way radio dispatch systems, quartz crystal manufacture, and more.

A serial entrepreneur, he and his wife, Arlene Harris, have cofounded numerous wireless technology companies. This includes Cellular Business Systems, SOS Wireless Communications, GreatCall, and ArrayComm. Cooper is currently chairman of Dyna LLC and a member of the FCC’s Technological Advisory Council. He was the first to observe the Law of Spectrum Capacity, which became known as Cooper’s Law.

In 2013, Cooper became a member of the National Academy of Engineering from whom he received the Charles Stark Draper Prize for Engineering. He was awarded the Marconi Prize “for being a wireless visionary who reshaped the concept of mobile communication.” He has been inducted into the Consumer Electronics Hall of Fame and Wireless History Foundation’s Wireless Hall of Fame. The Radio Club of America awarded him a Lifetime Achievement Award in 2010. He is a lifetime member of the IEEE, was president of its Vehicular Technology Society and received its Centennial Medal. In 2007, Time magazine named him one of the “100 Best Inventors in History.” He is a Prince of Asturias Laureate.

Cooper grew up in Chicago, the son of Ukrainian immigrants. He attended Crane Technical High School and the Illinois Institute of Technology, where he is a Life Trustee. He served in the US navy as a submarine officer during the Korean Conflict.