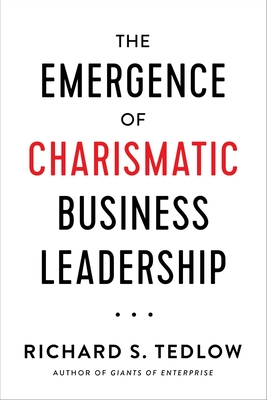 The Emergence of Charismatic Business Leadership

What makes a truly successful leader? Whether you’re the manager of a small team or the CEO of a global brand, learn how leading business figures have developed their leadership skills and management styles to become more effective leaders.

In The Emergence of Charismatic Business Leadership, Harvard Business School Emeritus professor Richard S. Tedlow examines how the role of the business leader has changed since World War II. A handful of individuals have helped transform the face of modern-day leadership, making charisma essential to the role. But what does this change mean for the future? How can you become the next world-changing leader?

In order to answer these questions, we must look at leaders like Oprah Winfrey, Elon Musk, and Steve Jobs. Today, Jobs is considered to be the model of the modern charismatic business leader, but it would have been inconceivable for him to be the CEO of a major company in 1955, the year he was born. Though all three of these pioneers were once outsiders, they each found success by innovating their management style and using their charisma to champion their clear and ambitious vision.

Through Tedlow’s in-depth accounts of modern business history, we see how charismatic leadership enables the creation of revolutionary new products—the battery electric vehicle, the smart phone—and makes it possible for former outsiders to attain power and influence. However, the book also considers the careers of people who used their charisma to mislead, such as Jeff Skilling of Enron and Elizabeth Holmes of Theranos.

Charisma can get you far, but if not accompanied by genuine character, it will lead you astray. In this thorough examination, Tedlow shows how charismatic figures have developed the leadership skills and management tools necessary to oversee a successful business and become a charismatic business leader.

Richard S. Tedlow is the Class of 1949 Professor of Business Administration Emeritus at the Harvard Business School. For more than three decades, Tedlow taught Business History, Marketing, and Business and Government to thousands of MBAs and executives, and was ranked as one of the most highly rated teachers at the School. His books Giants of Enterprise (2001) and Andy Grove (2006) both made Business Week’s list of top ten best business books of the year, and the latter was selected by Barack Obama as one of the ten books he recommends for leaders. Tedlow’s work has been translated into more than a half-dozen languages.

In 2010, Apple asked Professor Tedlow to join the company as a faculty member of the newly created Apple University, the company’s internal executive education arm. In that capacity, he developed and taught classes for Apple executives until his retirement in 2018.
Loading...
or support indie stores by buying on