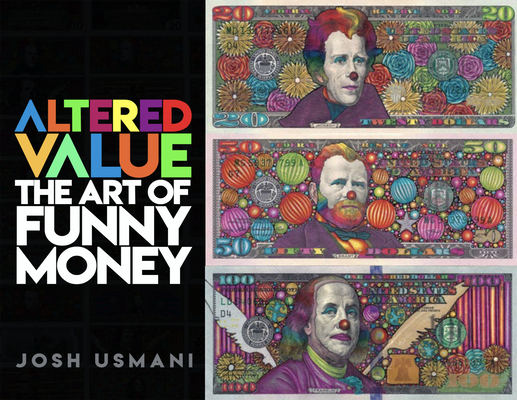 The Art of Funny Money

JOSH USMANI is a Cleveland-based artist, writer, instructor, and curator. Josh studied painting at Cleveland State University and has been drawing since he was six years old. Inspired by a variety of sources, Josh's artistic influences include comic book artists from his childhood and modern artists such as Marcel Duchamp and Andy Warhol. His award-winning artwork has been featured in more than 100 group gallery exhibitions and solo shows. He is represented by Tregoning & Company in Cleveland. Josh has presented workshops, lectures, and participated in panels at venues throughout Northeast Ohio, including Artists Archives of the Western Reserve, the Cleveland Institute of Art, Mandel Jewish Community Center, SPACES, and more. Josh has also been teaching kids art and cartooning classes since 2014, at institutions such as the Cleveland Institute of Art, Campus International School, Orange Art Center, and Shore Cultural Centre. Previously, Josh was Visual Arts Editor of Cleveland Scene Magazine and co-director of PopEye Gallery at 78th Street Studios (Cleveland). Funny Money is an ongoing series of more than 150 drawings on real currency from the U.S. and around the world. Additional examples of his work can be viewed at JoshUsmani.com.
Loading...
or support indie stores by buying on