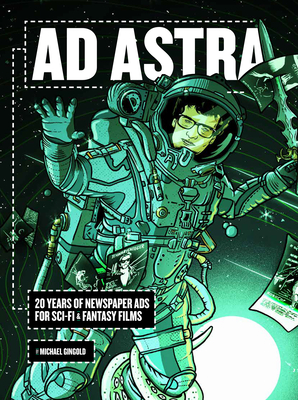 Once upon a time - the 1980s - in a galaxy not really all that far away - New York - Michael Gingold started a collection of newspaper advertisements for the science fiction, fantasy, and horror releases that stoked his passion as a genre fan. Eventually, he would grow up to become editor-in-chief of the horror magazine Fangoria, plus a writer for numerous other genre publications, a screenwriter, respected author, and all-around expert for films frightful and fanstastical.

As the years went by, Michael held on to this collection of weird and wonderful art, eventually publishing the best-selling, horror-themed Ad Nauseam: Newsprint Nightmares from the 1980s and its sequel, Ad Nauseam II: Newsprint Nightmares from the 1990s and 2000s. And now he presents Ad Astra: 20 Years of Newspaper Ads for Sci-Fi & Fantasy Films, a year-by-year look at the movies that shaped many a childhood in the '80s and '90s.

Inside this 270-page book, you'll find Star Trek to Starship Troopers, The Dark Crystal to Dark City, Blade Runner to The Running Man, RoboCop to Robot Jox, The Empire Strikes Back to Back to the Future, and many, many more. See alternate artwork for your favorite films, learn the fascinating behind-the-scenes stories of their marketing campaigns, and read the most entertaining and unexpected quotes from reviewers at the time all carefully curated by Michael.

MICHAEL GINGOLD first began reproducing newspaper ads for 1980s horror films in his Xerox fanzine Scareaphanalia, and went on to become a longtime editor and writer for Fangoria magazine and on-line. He also currently contributes to Rue Morgue, Birth.Movies.Death, Time Out New York, Scream, and others. Michael is the author of The FrightFest Guide to Monster Movies and Shark Movie Mania, and has created featurettes and written liner notes for numerous Blu-ray and DVD releases.
Loading...
or support indie stores by buying on