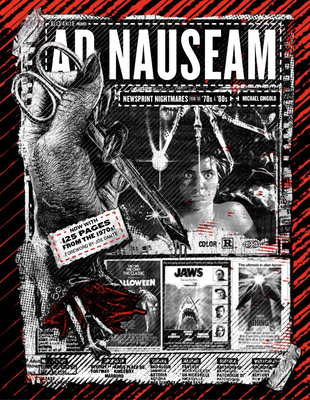 Newsprint Nightmares from the '70s and '80s (Expanded Edition)

BRAND NEW & EXPANDED EDITION Now with 125 additional pages of film ads from the 1970s and a new foreword by director Joe Dante As featured in Entertainment Weekly, The New York Times, The Wall Street Journal, Fangoria, and more.

Growing up in the 1970s and 1980s, Michael Gingold became obsessed with horror movies, and his love of the genre led him to become a Fangoria writer and editor for over 30 years, as well as a contributor to Rue Morgue and others. But before all that, he took his scissors to local newspapers, collecting countless ads for horror movies, big and small.

Ad Nauseam: Newsprint Nightmares from the '70s and '80s is a year-by-year deep dive into the Gingold archive, with more than 700 ads Within these pages you'll see rare alternate art for film franchises such as Halloween, Friday the 13th, A Nightmare on Elm Street, Child's Play, Jaws, The Texas Chainsaw Massacre, and The Exorcist. You'll also revel in oddities including Invasion of the Blood Farmers, Psycho from Texas, Dracula Blows His Cool, Zombie Island Massacre, Twitch of the Death Nerve, and many more.

Gingold also provides personal recollections and commentary, and unearths vintage reviews to reveal what critics of the time were saying about these films.

Steel yourselves, genre junkies: Ad Nauseam is an unmatched journey into the wild world of 1970s and 1980s horror movies

MICHAEL GINGOLD first began reproducing newspaper ads for horror films in his Xerox fanzine Scareaphanalia, and went on to become a longtime editor and writer for Fangoria magazine and on-line. He also currently contributes to Rue Morgue, MovieMaker, Scream, and others. Michael is the author of The FrightFest Guide to Monster Movies and Shark Movie Mania, and has created featurettes and written liner notes for numerous Blu-ray and DVD releases.JOE DANTE is an American film director, producer, editor, and actor. His directorial filmography includes the movies Piranha, The Howling, Gremlins, The 'Burbs, Matinee, and Small Soldiers. He additionally directed television episodes for Police Squad!, The Twilight Zone, and Amazing Stories.
Loading...
or support indie stores by buying on
(This book is on backorder)