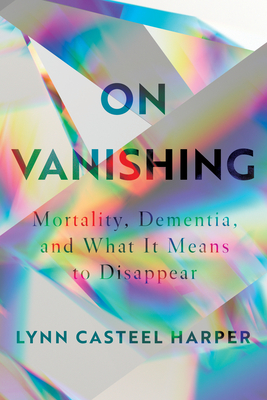 Mortality, Dementia, and What It Means to Disappear

An essential book for those coping with Alzheimer's and other cognitive disorders that "reframe s] our understanding of dementia with sensitivity and accuracy . . . to grant better futures to our loved ones and ourselves" (Parul Sehgal, The New York Times).

An estimated fifty million people in the world suffer from dementia. Diseases such as Alzheimer's erase parts of one's memory but are also often said to erase the self. People don't simply die from such diseases; they are imagined, in the clich's of our era, as vanishing in plain sight, fading away, or enduring a long goodbye. In On Vanishing, Lynn Casteel Harper, a Baptist minister and nursing home chaplain, investigates the myths and metaphors surrounding dementia and aging, addressing not only the indignities caused by the condition but also by the rhetoric surrounding it. Harper asks essential questions about the nature of our outsized fear of dementia, the stigma this fear may create, and what it might mean for us all to try to "vanish well."

Weaving together personal stories with theology, history, philosophy, literature, and science, Harper confronts our elemental fears of disappearance and death, drawing on her own experiences with people with dementia both in the American healthcare system and within her own family. In the course of unpacking her own stories and encounters--of leading a prayer group on a dementia unit; of meeting individuals dismissed as "already gone" and finding them still possessed of complex, vital inner lives; of witnessing her grandfather's final years with Alzheimer's and discovering her own heightened genetic risk of succumbing to the disease--Harper engages in an exploration of dementia that is unlike anything written before on the subject.

A rich and startling work of nonfiction, On Vanishing reveals cognitive change as it truly is, an essential aspect of what it means to be mortal.

Lynn Casteel Harper is a minister, chaplain, and essayist. Her work has appeared in Kenyon Review Online, North American Review, and Catapult magazine. She is a Barbara Deming Fund grant recipient and the winner of the 2017 Orison Anthology Prize in Nonfiction. She lives in New York City and is currently the minister of older adults at The Riverside Church.
or support indie stores by buying on
Copyright © 2020 American Booksellers Association