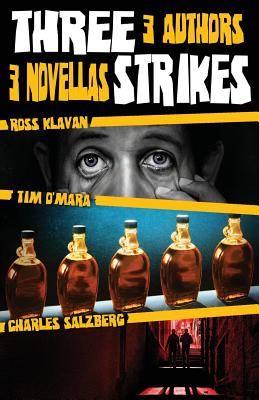 "Crime fiction aficionados with a taste for the offbeat will be rewarded." --Publishers Weekly

I Take Care of Myself in Dreamland by Ross Klavan

Bartok is left with scars from the Army but something else, as well-the memory of a strange, mystical experience that he calls "Red River." Back home and out of luck, he wanders through 1970's New York hoping to recapture this strange state. But others see Bartok as an easy mark for some very dirty business and their plan is to use him for murder.

Aggie is back in business. He's no longer smoking bootleg cigarettes as he did in "Smoked," now he's smuggling another usually legal-and quite valuable-products: maple syrup. Unfortunately, on the way from the Midwest to New York City, he's picked up an unwanted traveling companion, the fifteen-year-old daughter of his latest boss. It seems she wants to get to NYC to meet up with her on-line boyfriend, who turns out to be much more than she expected. All Aggie wants to do is drop off the syrup, pick up a paycheck, and get on home. Before he does that, he's gotta play hero. Again.

The Maybrick Affair by Charles Salzberg

As World War II rages in Europe, it's a couple weeks before Pearl Harbor and rookie reporter, Jake Harper, who works for a small Connecticut newspaper, is assigned a routine human interest story. A reclusive, elderly woman, has quietly passed away in her small cottage upstate. As Jake investigates the old woman's life and death he finds that years earlier she was tried and convicted of murdering her husband in a well-publicized, lurid trial in London, England. And, after digging further, he, unearths evidence that she might have had a connection to an even more famous British serial killer and that the ramifications of this story might affect America's entry into the War.