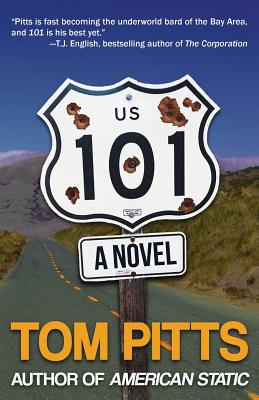 On the cusp of pot legalization in California, Jerry runs afoul of some San Francisco bikers in the marijuana game. He flees straight up Highway 101 to Humboldt County to hide out deep in the hills at Vic's, a reclusive pot farmer and old pal of his tough-as-nails mother. But trouble finds Jerry no matter where he goes and soon the bikers, a pair of stone killers, and a Russian weed tycoon named Vlad the Inhaler are all hot on Jerry's trail.

Fallout from the unfolding chaos piques the interest of SFPD detective, Roland Mackie, when he learns Jerry's host, Vic, is somehow involved. It opens a twenty-year-old wound, an unsolved case called the Fulton Street Massacre, and Mackie is willing to do whatever it takes to get a pair of cuffs on the elusive Vic.

When Jerry and his protectors are chased off the mountain and back down the 101 to an inevitable showdown back in the Bay, he learns Vic is much more than his host, he's a mentor, his mother's hero, and the toughest man he's ever met.

With an unforgettable cast of characters and an action-packed plot, 101 is a wild ride through Northern California's "emerald triangle."

"A story told in the unadorned, hard-boiled style of Hammett and Chandler, and, as the narrative works its way to the blood-soaked conclusion, it comes clear that this is, in its way, a story of relationships. A nice twist on a genre staple." --Booklist

"Tom Pitts is fast becoming the underworld bard of the Bay Area, and 101 is his best yet. The cast of characters is rich, and the subject matter--the marijuana biz in Humboldt County on the cusp of legalization--could not be more timely. Plenty of violent action, betrayal and tough talk. Reading 101 will give you a contact high. Get this book NOW." --T.J. English, author of The Corporation and The Westies

"Throw out everything you know about crime fiction. Tom Pitts, author of Hustle and American Static, returns with a plot stickier than an ounce of Humboldt County's finest. 101 is typical Tom Pitts, the kind of novel that proves he'll forever and ever have followers, trailing behind him begging for one more hit." --Eryk Pruitt, author of What We Reckon