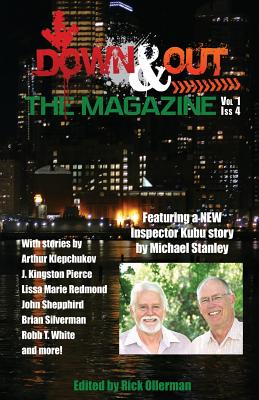 Issue four closes our exciting first year with the very talented debut of Arthur Klepchukov. His intelligent "A Damn Fine Town" is followed by film director and writer John Shepphird and a prequel to his award-nominated "Shill" trilogy, a bit of a teaser for those of you who may not have discovered Jane Innes...yet.

Brian Silverman is up next with a story set on his fictional Caribbean island of St. Pierre featuring his characters, Leonard and Tubby. The featured story this issue is of the most excellent Inspector Kubu by the writing team of Michael Stanley. If "Shoot to Kill" is your first Kubu tale, believe me, he's only better when he's in a novel.

Our featured historical story is by the very prolific, very good Frederick C. Davis, who became one of Harry Whittington's "St. Pete Boys," the group of writers like Gil Brewer, Day Keene, and occasionally John D. MacDonald, that met on Sunday afternoons at Harry's house. Davis's story is the first Secrets, Inc. installment, "Blood on the Block."

We close out the issue with an offbeat heist story by Robb T. White called "Inside Man," and a short piece by the always terrific Lissa Marie Redmond, who first appeared in issue two, called "We Don't Talk About Lester Anymore." There's a good reason for that.