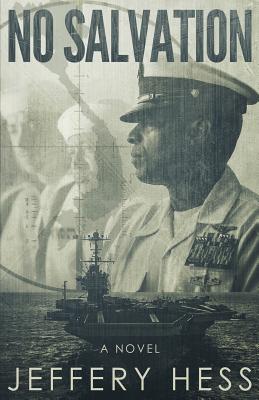 Inspired by actual events, No Salvation features the USS Salvation as it sails for months on end in the South China Sea in the violent closing days of the Vietnam War. Exhaustion, drugs and discontent run rampant aboard ship and crew morale is at an all-time low. These conditions affect four thousand men being sequestered for months on end without port visits has everyone on edge.

This is 1972, a time when inequality and racial tension permeated ships fleet-wide. As a way to mitigate racial unrest, the ship's captain brings in Commander Robert Porter as his Executive Officer. Commander Porter isn't sure if he's been selected for the job because of his skills or for the color of his skin, but the black crew doesn't accept him.

Amid rampant drug use and various forms of sabotage, the biggest challenge to the ship's performance and the crew's safety is a series of violent attacks made by planes launching from the flight deck, but more perilous are the racial tensions boiling below.

Porter is uniquely positioned to save them all, but can he? If so, at what cost?

Praise for NO SALVATION:

"Truth, as they say, may be stranger than fiction, but novelist and award-winning editor Jeffery Hess manages to masterfully blend both in No Salvation. Based on actual events from another era, Hess's novel with page-turning cinematic appeal sizzles with gritty realism and uncomfortable truths regarding racial tensions aboard a U.S. Navy carrier. I dare readers to walk away unchanged--in how they see others, and how they see themselves in the world." --Tracy Crow, author of Eyes Right: Confessions of a Woman Marine

"In a skillful fictionalization of the racial discord aboard the USS Kitty Hawk in 1972, Mr. Hess has created an unflinching picture of life aboard a Navy carrier forty-seven years ago, in a work that builds in tension with each chapter to a decisive climax, bloody, but prescient with hope." --Raymond Hutson, author of Finding Sgt. Kent

"From the opening chapter Hess plunges you deep within a Navy aircraft carrier where a brutal black vs. white event has occurred, with characters rich enough to have stand-alone stories of their own. Powerful is not only the first word that comes to mind when describing No Salvation, it's the best word." --Jonathan Brown, author of the Lou Crasher series

"Hess, himself a Navy veteran, knows exactly what he's doing, and has given us a riveting and compelling story firmly based on real events from the closing days of the Vietnam war." -- Tim Bazzett, author of the Cold War memoir Soldier Boy: At Play in the ASA