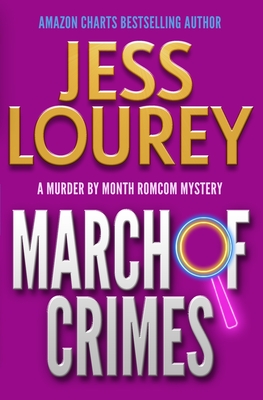 "Packed with charmingly ridiculous characters, I laughed my way through this small town mystery." ―Book Riot

Ida Gilbertson of the Battle Lake Senior Sunset nursing home has a new hobby: crafting life-sized dolls and displaying them around town. Budding PI Mira James finds the homemade mannequins creepy enough on their own, but when she's forced to sit next to one and discovers a human corpse under the hat and wig, it becomes personal.

Police Chief Gary Wohnt is all too eager to pin the blame on Mira. When her sleuthing gives him the perfect excuse to lock her up, it's up to Mayor Kennie Rogers and Mrs. Berns to help her escape.

Racing against the clock, Mira must unmask the murderer before she either becomes a jailbird...or the next dolled-up victim.

March of Crimes is the eleventh in an ongoing romcom mystery series featuring Mira James, an urban woman with rural Minnesota roots. The books can be read in any order; each novel stands alone. Get all the Mira James romcom mysteries today

Or, if you love to sink into a satisfying binge read, check out the bundles:

PRAISE FOR MARCH OF CRIMES