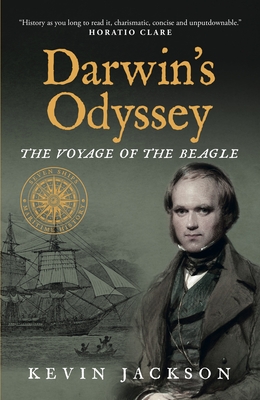 The Voyage of the Beagle

The young Charles Darwin was like a young Indiana Jones. For five years in his mid-twenties, he sailed on the BEAGLE around the world, exploring jungles, climbing mountains, trekking across deserts. With every new landfall, he had new adventures: he rode through bandit country, was thrown into jail by revolutionaries, took part in an armed raid with marines, survived two earthquakes, hunted and fished. He suffered the terrible cold and rain of Tierra del Fuego, the merciless heat of the Australian outback and the inner pangs of heartbreak. He also made the discoveries that finally led him to formulate his theory of Natural Selection as the driving force of evolution. The five-year voyage of the BEAGLE was the basis for all Darwin's later work; but it also turned him from a friendly idler into the greatest scientist of his century.

Kevin Jackson is an English writer, and has worked as a film-maker, radio producer and television director for the BBC; Associate Arts Editor for The Independent. He has written for The New Yorker, Granta, The Sunday Times (London), The Guardian, and Vogue, among other publications. His books have been chosen as a Book of the Week in the Guardian and a Book of the Year in the Express.
Loading...
or support indie stores by buying on