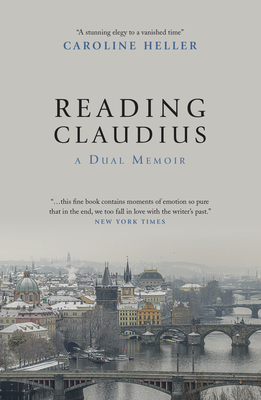 In Reading Claudius, Caroline Heller does what Rilke called the "heart-work," exploring moral accountability and the toll exacted by the fact of survival. Her family story begins in pre-war Czechoslovakia, passes through the Nazi holocaust, and continues on in postwar America, affirming that events may end but repercussions never do. A searching and humane memoir.

Sven Birkerts, author of The Art of Time in Memoir: Then, Again

In this unforgettable dual memoir of her parents' lives and her own, Caroline Heller brings to life the lost world of European caf culture, and reminds us of the sustaining power of literature in the most challenging of times.

Heller vividly evokes prewar Prague, where her parents lived, loved, and studied. Her mother, Liese Florsheim, was a young German refugee initially drawn to Erich Heller, a bright but detached intellectual, rather than to his brother, Paul. As Hitler's power spreads and World War II becomes inevitable, their world is destroyed and they must flee the country and continent. Paul, who will eventually become the author's father, is trapped and sent to Buchenwald, where he survives under hellish conditions. Though Paul's life nearly ends in Europe, he reunites with Liese in the United States, where they marry. Their daughter Caroline, restless and insecure, carries the trauma of her parents' story with her, but her quest to make peace with her heritage is eased by her love of books and writers, part of her family legacy. Through the darkest years of Hitler's rule, Caroline's parents and uncle had turned time and time again to literature to help them survive--and so she does as well. Written with sensitivity and grace, Reading Claudius is a profound meditation on the ways we strive to solve the mysteries of our pasts, and a window into understanding the ones we love.

CAROLINE HELLER is the director of the interdisciplinary Ph.D. program in Educational Studies at Lesley University, where she is also a professor in the graduate school of education. She lives in Boston with her family.
Loading...
or support indie stores by buying on