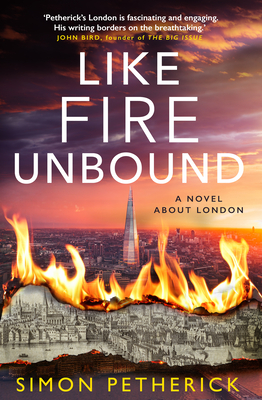 A disparate cast of characters are drawn together under the gaze of a mysterious mystic as they try their best to survive in the new contemporary capital, a city of changing rules, privatised streets, gig economies, fractured traditions. As the heat beats down upon them, day after day, they each attempt differing strategies to maintain their place, to protect their futures and somehow to forge a way through the challenge of the day. And in the background is the story of Lily Cadyman, maid to Thomas Farriner, whose bakery in Pudding Lane was the source of the first flames which caused the Great Fire of 1666. Like Fire Unbound is a novel about survival, where the city itself emerges as a character alongside all the others: essentially democratic, an egalitarian character like our cast who struggle to maintain their integrity in the early years of the twenty first century.

SIMON PETHERICK has lived in London for many years. His novel English Arcadia takes as its subject matter the left-wing Westminster political party of the 1940s, Common Wealth. His third novel, The Damnation of Peter Pan, focuses on the fantasies of JM Barrie in The Kensington Gardens. Simon has been a part of London s fabric all his adult life: arranging rock concerts in Hyde Park, running the fashion house Hardy Amies in Savile Row, writing and publishing books from an office in Soho.
Loading...
or support indie stores by buying on
(This book is on backorder)