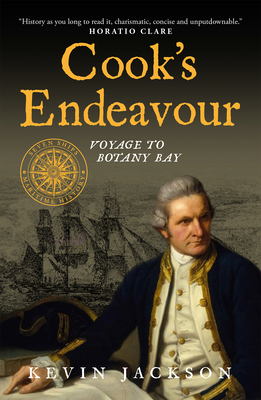 This is history as you long to read it, charismatic, concise and unputdownable.- HORATIO CLARE

Like Sir Francis Drake and Lord Horatio Nelson in Kevin Jackson's acclaimed maritime history series, Captain James Cook was also born of humble means. The son of a Scottish farm labourer and a mother from Yorkshire, Cook joined the British merchant navy as a teenager, and would go on from his humble beginnings to become an explorer, master navigator, cartographer and one of the most celebrated naval Captains in British history.

Cook's Endeavour is Jackson's masterful chronicle of Captain Cook's first Pacific Ocean voyage; a landmark journey which resulted in the mapping of largely uncharted areas of New Zealand and Australia, first encounters with aboriginal tribes and leaps and bounds in botanical discovery. Aboard the Endeavour, Cook mapped a whole new world.

But Cook's historic journey was not without tribulation, or without challenge - the famed botanist Joseph Banks, Cook's contemporary and natural science expert on the Endeavour, was everything Cook was not; dapper, aristocratic, awarded with instantaneous fame for his discoveries in the aptly named Botany Bay.

Cook's Endeavour is the thrilling and inspiring story of a boy, lured in his youth to the sea, who became a man forever synonymous with discovery, legacy and adventure.

Kevin Jackson is an English writer, and has worked as a film-maker, radio producer and television director for the BBC; Associate Arts Editor for The Independent. He has written for The New Yorker, Granta, The Sunday Times (London), The Guardian, and Vogue, among other publications. His books have been chosen as a Book of the Week in the Guardian and a Book of the Year in the Express.
Loading...
or support indie stores by buying on
(This book is on backorder)