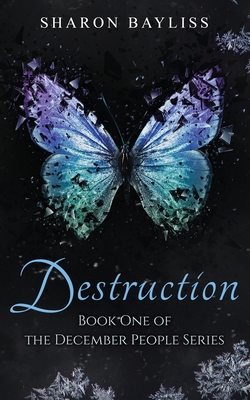 DESTRUCTION is Book One in The December People Series, a family saga about dark wizards living in Houston, Texas. Destruction is a Foreword's Book of the Year Awards IndieFab Finalist and a Next Generation Indie Book Awards Finalist.

Praise for Destruction by Sharon Bayliss:

"It's a story of family secrets, family struggles, family magic - all wrapped up in a fantasy that is suspenseful, shocking and surprisingly sympathetic." - Jen Estes, Author of The Dreamwalker Diaries Series

"The characters feel like real people, and the story moves at the perfect pace. It's dark, bleak in places, but at the centre of the story is a man who loves his family." Emma Adams, Author of the Darkworld Series

David Vandergraff wants to be a good man. He goes to church every Sunday, keeps his lawn trim and green, and loves his wife and kids more than anything. Unfortunately, being a dark wizard isn't a choice.

Eleven years ago, David's secret second family went missing. When his two lost children are finally found, he learns they suffered years of unthinkable abuse. Ready to make things right, David brings the kids home even though it could mean losing the wife he can't imagine living without.

Keeping his life together becomes harder when the new children claim to be dark wizards. David believes they use this fantasy to cope with their trauma. Until, David's wife admits a secret of her own--she is a dark wizard too, as is David, and all of their children.


Now, David must parent two hurting children from a dark world he doesn't understand and keep his family from falling apart. All while dealing with the realization that everyone he loves, including himself, may be evil.