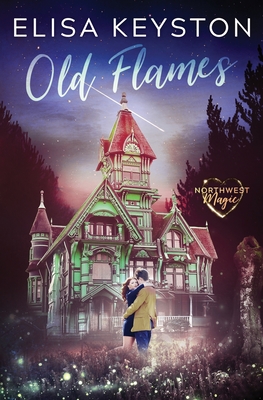 Lose yourself in the magical forests and charming towns of the Pacific Northwest, where picturesque Victorian homes hide mysteries spanning decades, faeries watch from the trees, and romance awaits... for those bold enough to seek it.

Laney isn't looking for love. She's perfectly happy with the life she's built for herself in the little town of Foreston, Washington. She's a successful businesswoman, the owner of an alterations shop with a clientele across the northwest. She's the chair of the local Victorian house museum's annual fashion show. And she has a reputation for a magic touch: the rumor around town is that anyone who wears one of the period costumes she designs in her spare time will be blessed with good luck.

That's what they say, anyway. Laney knows the truth is a bit more complicated-anything she wills while sewing has a tendency of coming to pass. It's a supernatural gift from the fae who are said to inhabit the woods surrounding the Paine Estate, and it's taught her to keep a guard on her notorious redheaded temper. But keeping her temper becomes difficult when journalist Paul Nelson comes to town to do a feature about the museum. With his stunning good looks and swoon-worthy English accent, Paul is charming, irresistible... and just so happens to be Laney's ex.

Laney wants nothing more than to keep Paul at arm's length, but when she stumbles across a series of break-ins at the museum, she may have no choice but to trust the dashing reporter who once broke her heart to help her catch the culprit. And when a nearby forest fire threatens the safety of the town-and of the woods-will Laney be able to put her old feelings aside in order to protect the magic of Foreston? Or will that same magic lead to an unexpected happy ending?